Pierre-Francois Bouchard's men accidentally stumbled upon the ancient stone slab on July 19, 1799, during a last-minute construction job in a run-down fort in Rosetta, Egypt. As the men busted walls, they discovered a large stone block covered in 3 types of writing, including ancient Greek.

Intrigued by their discovery, Bouchard shared the find with French scholars digging through Egypt for archaeological treasures.

After much analysis, the slab was decreed a the Rosetta Stone, where the letters and symbols chiseled into its dark face would later shed light on mysteries and secrets behind ancient Egyptian civilizations. However, scholars must first be able to crack its code.

What is the Rosetta Stone? 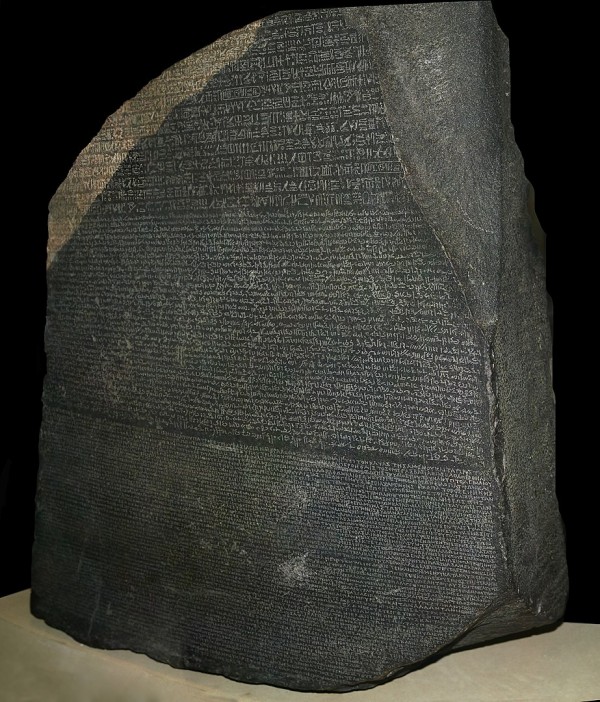 According to the British Museum, the Rosetta Stone is one of the most famous objects in its care. The stone itself is a broken part of a much bigger stone slab. Messages carved into its face, written in three types of writing, were an important clue for experts in learning to read Egyptian hieroglyphs.

After the Stone's discovery, it was later shipped to England in February of 1802; it was then presented to the British Museum in July of the same year by George III. The Rosetta Stone, along with other sculptures, was placed in temporary structures on the museum's grounds because the floors couldn't handle the weight. After which, the museum was able to open a new building to house the gallery.

The Rosetta Stone has been displayed in the British Museum since 1802.

The Legacy of the Rosetta Stone

Scholars have long puzzled over the meaning of the markings chiseled onto the face of the slab. Since it obtained identical content in 3 languages, scholars thought that the stone would be able to help crack the mysteries of ancient Egypt.

In collaboration with a variety of scholars across Europe, the two most notable contributions came from France and England. Thomas Young, a British polymath, most known for his many scientific contributions, treated the mystery of the Rosetta Stone as a complex mathematical problem. After translating the slab's ancient Greek, young took extensive notes on the systematic attempt to match each translation on the hieroglyphs.

Young also attempted to compare the glyphs to other statues and was able to identify phonetic sounds which some glyphs represented, figured out what some meant, and pieced together how some characters/words were pluralized.

But, Jean-Francois Champollion was most credited for cracking the code since he had extensive knowledge of the Egyptian language compared to Young, National Geographic reports.

Champollion, a Frenchman dubbed as the founder of Egyptology that was also credited with cracking the stone's code in 1822, used the stone to create a new alphabet of phonetic hieroglyphic characters for which other scholars hopped on to fully translate the slab. The French Egyptologists' work eventually validated the discovery and translation of the Decree of Canopus.

The translation of the Rosetta Stone became the backbone of Egyptology and an iconic stele credits as one of the most important artifacts in history.