Japanese Billionaire Yuzaku Maesawa of SpaceX dearMoon Mission Will Fly to Space Soon; Who Will Join Him?

Back in 2018, Japanese entrepreneur Yusaku Maezawa was revealed to be behind the dearMoon Project: an art project that aims to send tourists around the Moon. And a new update teases who might be joining the visionary on the Starship trip.

On Thursday, July 16, the billionaire and online fashion retail magnate released a video on his YouTube Channel. After receiving more than a million applications from 249 different countries, Maezawa revealed in the 5:33 video that they're now in the final stages of screening who'll be joining him on his moon flight set two years from now.

The video featured a ballet dancer and Ph.D. holder in Atomic and Laser Physics from Oxford, a Pulitzer-winning photojournalist, an LGBTQ ambassador for the European Parliament, and more. It also featured "The Everday Astronaut" Tim Dodd and celebrity DJ Steve Aoki, sharing why they should join the 8-person lunar journey conceived by Yusaku Maezawa. 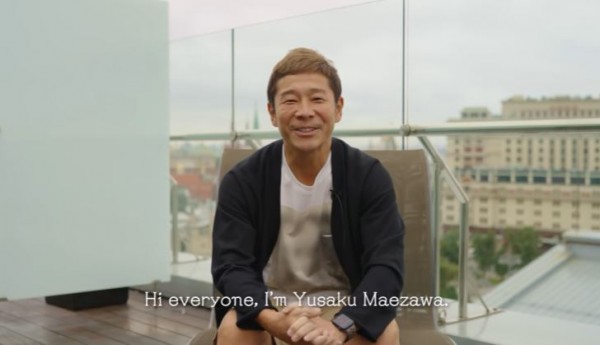 ALSO READ: Japanese Billionaire Will Choose 8 Artists To Join Him for a Moon Trip on a SpaceX Rocket

First announced in September 2018, the dearMoon Project was conceived and financed by Yusaku Maezawa and is described as a lunar tourism and art project. It will use a SpaceX Starship on a single trajectory going around the world, with the passengers being Maezawa himself, plus eight civilians, and an additional provision for crew members. The eight passengers to be chosen by the Japanese billionaire will go on a six-day, all-expense-paid travel, with the sponsor hoping that the unique experience would spur these artists to create something new. Upon their return to Earth, the resulting art is expected to be exhibited with the aim of promoting peace.

The SpaceX Starship mission for the dearMoon Project is the successor for an earlier attempted collaboration between the Elon Musk aerospace company and the founder of the retail portal Zozotown. Om February 2017, SpaceX announced its plans to send two tourists on a trajectory around the moon. Originally planning two use the Crew Dragon 2 spacecraft, the original plans were shelved in favor of the dearMoon Mission, using its Starship spacecraft instead.

Backlash Against Billionaires Going Into Space

Leading to the scheduled 2023 flight, Yusaku Maezawa also once developed the idea of a "matchmaking" TV show that would find him a girlfriend that he would take with him on his lunar journey. However, after receiving significant backlash, Maezawa canceled his plans.

The latest update on the dearMoon Project also comes on the heels of Richard Branson recently going on his Virgin Galactic Unity 11 flight, and Jeff Bezos is set to fly further into space this coming week, July 20. However, this recent string of billionaire-backed space flights is not universally supported, with naysayers calling them as nothing more than "vanity projects" and with no scientific merit. However, an article from Forbes explains, for example, why Branson's recent flight was not all space tourism. One member of the Unity 11 flight, scientist and astronaut Sirisha Bandla, was conducting studies onboard the flight.