A collaborative effort has led to the discovery of new inorganic material with the lower thermal conductivity ever recorded, paving the way for a new class of thermoelectric materials.

Led by researchers from the University of Liverpool, the new material marks a breakthrough in heat flow control at the atomic scale, achieved through the use of the latest in materials science. The new material, reported in the article "Low thermal conductivity in a modular inorganic material with bonding anisotropy and mismatch" in the Science journal, offers fundamental new insights into energy management and transfer. This new inorganic material could potentially lead to a new class of thermoelectric materials and devices for more sustainable solutions. 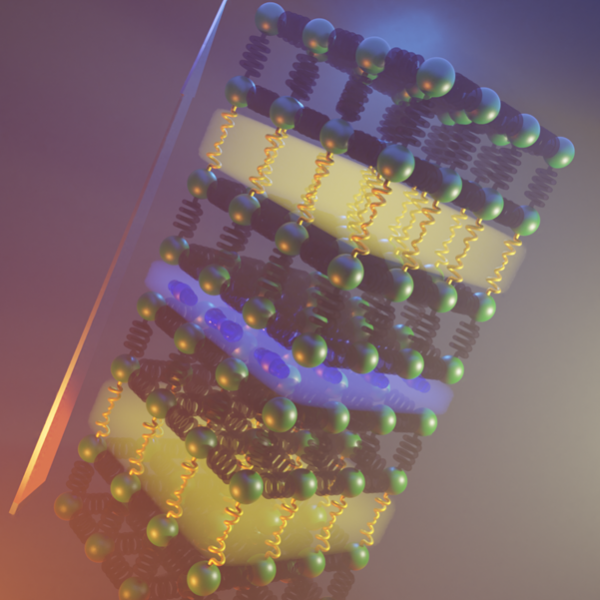 (Photo : University of Liverpool)
Using the right chemistry, it is possible to combine two different atomic arrangement (yellow and blue slabs) that provide mechanisms to slow down the motion of heat through a solid. This strategy gives the lowest thermal conductivity reported in an inorganic material.

The research team was led by Professor Matt Rosseinsky from the Department of Chemistry and Materials Innovation Factory and Dr. Jon Alaria from the Department of Physics and Stephenson Institute for Renewable Energy. Together, their team designed and synthesized the inorganic material in a way that combined two atomic configurations that each had the ability to slow down the rate of heat transfer through solid materials.

First, researchers identified how reduced heat transport was facilitated by each of the two atomic arrangements. They found the mechanisms responsible by measuring and modeling the thermal conductivities of two different structures, each based on one of the two arrangements.

Another challenge in fabricating the new inorganic material is in combining both of the mechanisms in a single material, mainly because it requires a precise arrangement of atoms in the material structure. A conventional approach would be to average out the mechanisms from the two atomic configurations. By selecting feasible chemical interfaces between the two, the team experimentally synthesized the inorganic material. This new inorganic material has a significantly lower thermal conductivity compared to either of its parent materials, all in one arrangement.

Currently, about 70 percent of all energy generated in the world is wasted as heat, according to a 2018 report from UC Berkeley. Materials with low thermal conductivity are necessary to reduce, or even harness this byproduct heat from equipment and processes. The development of materials with even lower conductivity is necessary to advancing greener and more sustainable sources of energy.

"The exciting finding of this study is that it is possible to enhance the property of a material using complementary physics concepts and appropriate atomistic interfacing," Dr. Alaria said in a press release from the university. "Beyond heat transport, this strategy could be applied to other important fundamental physical properties such as magnetism and superconductivity, leading to lower energy computing and more efficient transport of electricity."

Check out more news and information on Thermoelectric Materials on Science Times.