Event Horizon Telescope Detects Strong Astrophysical Jet From Black Hole; What Is It Trying To Tell?

The Event Horizon Telescope (EHT) has gotten new photos that show a violent jet emitted from a supermassive black hole in unparalleled detail.

The photographs show the jet generated by the black hole at the heart of the Centaurus A galaxy with ten times the accuracy and sixteen times the sharpness previously possible.

"This allows us for the first time to see and study an extragalactic radio jet on scales smaller than the distance light travels in one day," astronomer Michael Janssen of the Max Planck Institute for Radio Astronomy in Germany and Radboud University in the Netherlands, said in a statement. "We see up close and personal how a monstrously gigantic jet launched by a supermassive black hole is being born." 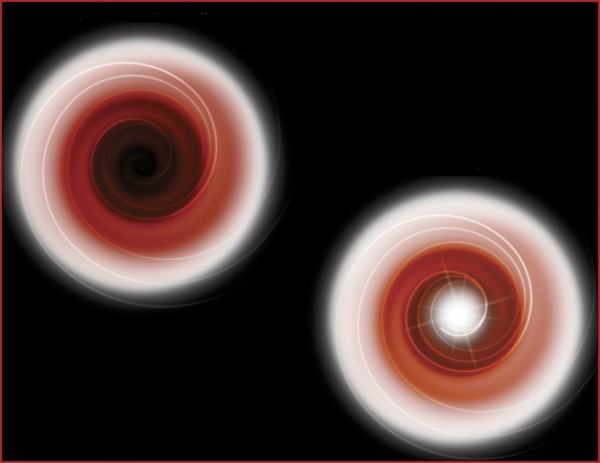 (Photo : NASA/Newsmakers)
384282 01: Orbiting telescopes found the strongest direct evidence yet for the existence of black holes by measuring the release of energy from space matter spiraling at an ever increasing speed into the bottomless maw that marks the edge of a black hole, January 12, 2001. Left: Gas from the companion star is drawn by gravity onto the black hole in a swirling pattern. As the gas nears the event horizon, a strong gravitational redshift makes it appear redder and dimmer. When the gas finally crosses the event horizon, it disappeaers from view. Because of this, the region within the event horizon appears black. Right: As above, gas from the companion star flows down onto the collapsed star--in this case a neutron star instead of a black hole. As the gas approaches the neutron star, a similar gravitational redshift makes the gas appear redder and dimmer. However, when the gas strikes the solid surface of the neutron star it glows brightly.

When viewed from Earth, the EHT data reveal huge lobes of radio waves emerging from a black hole that appears to be rather small. The black hole would seem as huge as an apple on the surface of the moon when amplified by a factor of 1 billion, according to the scientists, while the radio lobes, or jets, would be 16 times as wide as the moon itself. The black hole at the heart of Centaurus A, on the other hand, has the mass of 55 million suns.

The Centaurus is a mythical creature. When seen at radio frequencies, a galaxy known as NGC 5128 or Caldwell 77 is one of the brightest and biggest objects in the night sky. The galaxy, which is located in the constellation Centaurus, was discovered to be the first known source of radio waves outside of our Milky Way galaxy in 1949.

"We're seeing these jets in a way that we've never seen them before," study author Michael Janssen told Inverse. Jannsen is a researcher at the Max Planck Institute for Radio Astronomy in Bonn, Germany.

Maciek Wielgus, a co-author of the paper and researcher at the Center for Astrophysics at Harvard & Smithsonian said the black hole at the center of Centaurus A looks to be considerably different from the one at the center of the Milky Way, which EHT is also studying. He added that Centaurus A emits much more energy.

The new photographs are based on data collected during the 2017 imaging campaign, which resulted in the first images of a black hole, the one in the heart of the Messier 87 galaxy.

The observations were made possible thanks to the EHT partnership, which brings together eight radio observatories from around the world to act as one giant telescope. Because the resolution of a radio image is limited by the size of the telescope that receives the signal, the collaboration allows for extremely strong observations.

Scientists are still trying to figure out what causes the mysterious black hole jets, which are sprays of material that manage to escape the gravitational pull of black holes. Instead of being trapped inside their blackness, they travel millions of light-years across distances greater than the size of the galaxies they come from.

The new photographs also show that the regions of the jet farthest from the black hole are brighter than the parts closer to it, a previously seen but unexplained phenomena.

According to the statement, the researchers hope to employ space-based telescopes in the future to image the environment surrounding the black hole at Centaurus A's center at even shorter wavelengths and with much higher resolution. The ultimate goal is to capture photographs of the primary black hole itself rather than its immediate environs, similar to what the researchers accomplished with M87's black hole.

Experts published the reports of the study, titled "Event Horizon Telescope Observations of the Jet Launching and Collimation in Centaurus A," in the journal Nature Astronomy on Monday.