How Can Planets Survive White Dwarf's Stellar Evolution? Signs of Life on Planet Near a Dying Star Impossible

The University of Warwick experts have recently conducted a study that shows the effects of intense and rapid stellar winds that will collide with a planet while its parent star is on the brink of collapse. The study was lead by astrophysics expert Dimitri Veras and will soon present the findings aboard the virtual gathering of the National Astronomy Meeting NAM 2021. 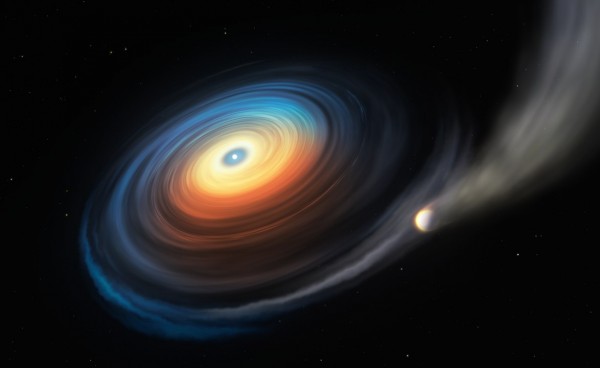 The new study provides data that could be handy for astronomy scientists as they search for life forms on the dead stars. The method includes the examination of the wind impacts on the planet as its parent star is on a white dwarf form. The study, published in the journal Monthly Notices of the Royal Astronomical Society, entitled "White dwarf planetary debris dependence on physical structure distributions within asteroid belts," concludes that life forms do not have a single chance surviving the rare, stellar evolution. However, the researches included that a strong magnetic field, also known as the magnetosphere, may help the planet and its contained living organisms survive the catastrophic phenomenon.

Earth, on the other hand, has a weak protective layer that could withstand the cosmic effects. Due to strong solar wind, our planet's atmosphere may erode quickly than expected. The sheet covering our entire planet is solely for ultraviolet protection and gas containment and would not work perfectly as a shield for solar wind particles.

Magnetospheres are a strong barrier between the surface of a planet and foreign materials that hover over space. However, not all planets have a magnetosphere. Fortunately, Earth has one, generated by its own iron core, but is not strong enough to deflect the violent solar winds.

Trinity College of Dublin expert and co-author of the study Aline Vidotto said solar winds have already gone through and eroded with the planet Mars. It is important to note that the red planet is not equipped with a large-scale magnetosphere. Vidotto emphasized that this is strong evidence of the solar wind's magnitude and how it can affect the planets with an active magnetosphere.

ALSO READ: Is Apollo 10's Lunar Module Still In Orbit Around The Moon 5 Decades After Launch?

Planetary Orbit in Correct Habitable Zone a Chance for Life

The study utilized a model to visualize how solar winds work in terms of density and speed as it is affected by the expanding planetary orbit. The data from the model suggests that all the effects work on top of each other and are a perfect mix to make the magnetosphere of a planet shrink and expand. The experts said on the research that a specific planet could maintain its magnetosphere as the sun evolves through time if it had a similar strong composition as the planet Jupiter, but 10 times greater.

In conclusion, the strong solar winds, the magnetosphere, and the planet's habitable zone should work for a planet to survive all of the transitions that a star will undergo. Unfortunately, there are still no signs of life found in some of the planets close by white dwarfs observed before. Further studies, along with the utilization of the James Webb Telescope, will be conducted to find signs of life in these areas, PhysOrg reports.

RELATED ARTICLE: Why Do Asteroids and Comets Have Weird Shape? The Reason Behind Moon and Star's Spherical Shape Explained