Monkeypox Spreading in 27 US States; Over 200 People Possibly Exposed to the Virus and the CDC Says It Could Be Fatal

Over 200 people across 27 states in the United States might have been exposed to monkeypox, recent reports showed.

According to Deseret News, the Centers for Disease Control and Prevention is presently monitoring such cases. In addition, Andrea McCollum, who's leading the poxvirus epidemiology unity at the National Center for Emerging and Zoonotic Infectious of the agency, said the state and local health officials are working with the CDC to assess exposed people.

Describing the recently reported number, McCollum said, "it is a lot of people." At present, the health expert added, they known of one confirmed case after a resident of Texas, who's from the US, traveled from Texas to Nigeria.

This individual has become the first person to be infected with monkeypox in 2021. This particular person, according to a similar Evening Standard via Yahoo Life! report News took two flights during his trip. Specifically, he flew from Nigeria to Atlanta, then from Atlanta to Dallas. 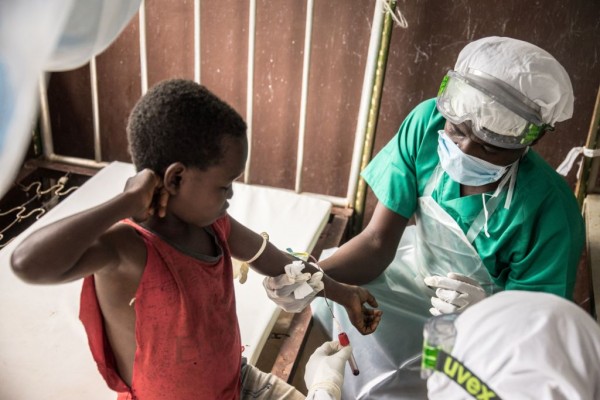 (Photo: CHARLES BOUESSEL/AFP via Getty Images)
Blood samples are drawn from a boy who didn't display any sign of monkeypox despite his all family has been contaminated, while at a quarantine area of the center of the International medical NGO Doctors Without Borders (Medecins sans Frontieres - MSF), in Zomea Kaka, in the Lobaya region, in the Central African Republic on October 18, 2018.

The CDC said this variant of monkeypox could be fatal in roughly one in every 1000 people. This means that one percent of people who get it can die.

Also specified in the space agency's statement, monkeypox is an unusual but possibly severe viral infection that typically starts with flu-like disease and swelling of the lymph nodes. It also progresses to a widespread rash on the face and the body.

The CDC also said monkeypox is spread when an individual comes into contact with the virus from an animal, human, or materials exposed to the virus.

Some Monkeypox Facts and Symptoms

The information posted on the CDC website said monkeypox was first detected in 1958 when two outbreaks of a pox-like infection occurred in colonies of monkeys kept for investigation, hereafter the name, "monkeypox."

The first case of monkeypox in a human was recorded in 1970 in the Democratic Republic of Congo during the intensified initiative to combat smallpox, the World Health Organization reported. Since then, monkeypox has been reported to have infected humans in other western and central African countries.

Monkeypox symptoms in humans are similar but milder compared to the smallpox symptoms. This illness starts with fever; muscle aches, fever, exhaustion, and headache.

The main difference between monkeypox and smallpox is that it causes lymph nodes to swell while the latter-mentioned does not.

The incubation for this, from infection to the experience of symptoms for monkeypox, is typically seven to 14 days, although it can also range from five to 21 days.

At present, there is no proven and safe treatment for monkeypox infection. To control an outbreak in the US, smallpox vaccine, VIG or vaccinia immune globulin, and antivirals can be used.

As for prevention, the number of measures that can be applied to prevent the monkeypox virus. One of the things to do to prevent such an infection is avoiding contact with animals that could have harbored the virus. These include ill or that have been discovered dead in sites where there is an occurrence of monkeypox.

Another must-do is to avoid contact with materials like bedding, for one, that has been exposed to a sick animal. One also needs to isolate infected individuals from those who could be at risk for infection.

One more effective way to prevent getting infected with monkeypox is by practicing good hand hygiene after exposure to infected animals and humans. Lastly, it is essential to use PPE or personal protective equipment when caring for monkeypox patients.

Related information about monkeypox is shown on WFAA's YouTube video below: