Did Experts Just See This Underwater Volcano Near Christmas Island That Look Like the Eye of Sauron?

Multibeam sonar indicated that a recently discovered ancient undersea volcano on Christmas Island resembled the Lord of the Rings trilogy's "Eye of Sauron."

The researchers and the CSIRO's specialized ocean research vessel were on their 12th day of 'voyage of exploration to Australia's Indian Ocean Territories. A previously unknown and unimagined thing emerged on their screens, barely below 3,100 meters (10,170 feet) below the vessel.

Tim O'Hara, Senior Curator of Marine Invertebrates at Museums Victoria, wrote in The Conversation that the volcano erupted as a giant oval-shaped depression called a caldera. It measured 6.2 km by 4.8 km and was "surrounded by a 300-m-high rim (resembling Sauron's eyelids), and has a 300-m-high cone-shaped peak at its center (the 'pupil').

Calderas are formed when a volcano collapses, and the molten magma at the volcano's base shifts upwards, leaving an empty chamber. A big crater-like structure is formed when a thin solid crust on the dome's surface collapses. As the volcano continues to spew lava, the structure in the center evolves from a modest new peak to a more developed structure. 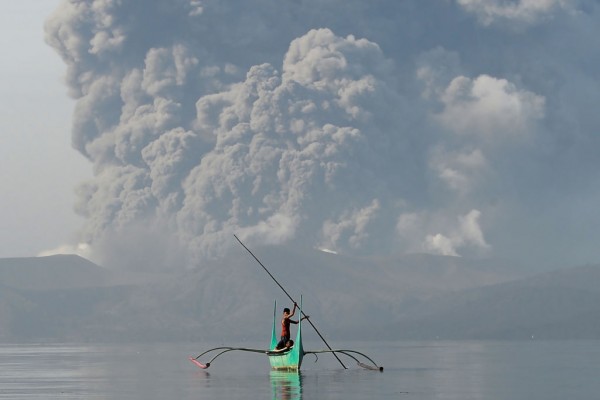 (Photo: TED ALJIBE/AFP via Getty Images)
[Representational Image] TOPSHOT - A youth living at the foot of the Taal volcano rides an outrigger canoe while the volcano spews ash, as seen from Tanauan town in Batangas province, south of Manila, on January 13, 2020. - The Philippines was on alert January 13 for the "explosive eruption" of a volcano south of Manila, which officials said could be imminent after a massive column of ash forced a halt to flights at the capital's main airport.

The legendary Krakatoa Volcano in Indonesia, which erupted in 1883 and killed tens of thousands of people, is its kind. It resurrected a little volcano named Anak Krakatoa (child of Krakatoa) in 1927 after its massive eruption left pieces of mountain rim visible above waters.

'Eye of Sauron' Not Alone

It's difficult to discern if a volcano is erupting underwater. The rafts of light pumice stone that float on the surface of the ocean following the blow, later becoming waterlogged and sinking to the seafloor, are one of the few 'tell-tale indications.'

ALSO READ: Science 'Facts' You Might Have Learned in School That Are No Longer True - For Now

Other smaller sea mountains surrounding the 'vocanic eye,' covered in numerous volcanic cones, were discovered after further mapping the south. Meanwhile, further south, a larger, flat-topped seamount was discovered. To keep with the Lord of the Rings concept, the researcher gave them the names Barad-dûr ('Dark Fortress') and Ered Lithui ('Ash Mountains'), respectively.

They were able to link the 'jagged nature of the first and the pumice-covered surface of the second' to mountain geology, in addition to the trilogy's subject.

Based on their location next to an ancient sea ridge when Australia was far further south, near Antarctica, geologists have calculated the three Karma clusters of seamounts to be 100 million years old.

According to Game Spot, the geologists were perplexed by the caldera's fresh-looking structure, which should be more than 100 million years old. Its sedimentation would appear to have partially hidden the caldera, yet it continued to build new ones along its original foundation after some time.

"However, life adapts to these geological changes," stated O'Hara, "and Ered Lithui is now covered in seafloor animals."

Their team is currently scanning the bottom to survey the sea life in these old and remote seascapes.

Check out more news and information on Science in Science Times.