As the world slowly eases back on traveling in the shadow of other COVID-19 variants, Lufthansa is taking one step ahead in safety by approving a new pre-flight rapid home test kit for its passengers.

The Lufthansa Group, including Austrian Airlines and Swiss International Air Lines, has geared up to safely carry thousands of passengers by providing its customers options for automatically ordering a COVID-19 home rapid testing kits. These kits are available ahead of any flight within Europe. One of its partners in the proactive step is testFRWD, an Austrian tech startup that develops AI-powered solutions for self-certifying COVID-19 tests. With this Lufthansa and testFRWD partnership, airline passengers can now seamlessly purchase an affordable test kit whenever they book their flights. 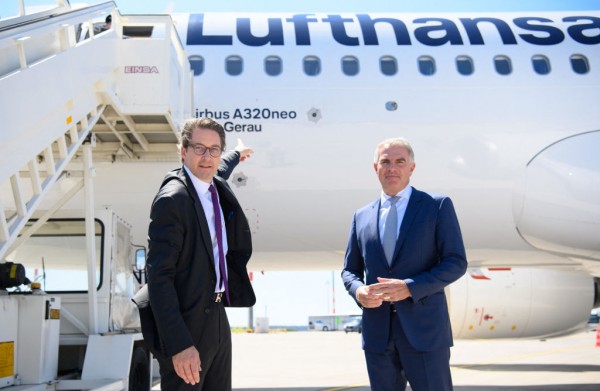 (Photo : Photo by SOEREN STACHE/POOL/AFP via Getty Images)
German Transport Minister Andreas Scheuer (R) and CEO of German airline Lufthansa Carsten Spohr (C) pose at the entrance of an Airbus A 320neo during the National Aviation Conference 2021 at the Berlin Brandenburg "Willy Brandt" Airport (BER), in Brandenburg, near Schoenefeld, on June 18, 2021

The testFRWD rapid testing kits are integrated with the identyME app, and the airline leader Lufthansa aims to rapidly expand to the UK as well as to more EU member states. The move follows the official online rollout of the EU Digital COVID Certificate at the start of this month, which allows citizens to fly between EU states and Norway, Liechtenstein, Iceland, and Switzerland. Also, plans and negotiations are already underway to expand the program to cover additional non-EU nations like the United States and the United Kingdom.

Reopening the borders has come at a time when the world is facing mounting concern over the rising COVID-19 delta mutation, which has been reported in almost a hundred countries. Some of these countries are member states of the European Union. As worries grow about the new strain being more infectious and resistant against vaccines, rapid and accessible testing is now even more crucial for EU's attempts to reopen its airports, and to reinvigorate the airline, tourism, and hospitality industries.

TestFRWD aims to fill the gap with the development and implementation of identyME, the AI-powered app that empowers users to take and to self-certify COVID tests with compatible test kits. Whenever customers order easy-to-use rapid testing kits from distributors endorsed by the three airlines, the cost only ranges from €5.40 ($6.36) and €14.95 ($17.60) - far from the hundred euros passengers would pay at an airport-provided PCR test. Lufthansa offers the more affordable option to its passengers traveling between countries that officially recognize AI-powered self-certifying tests, a technology led by Germany and Australia.

A Digital Advancement in Public Healthcare

"We are delighted to be working with EU's leading airlines to make pre-flight testing as accessible, easy, and convenient as possible," says testFRWD CEO and co-founder Veit-Ander Aichbichler in a press release. "With the delta variant putting the vaccines to the test, rigorous testing is crucial not just for reopening skies, but for protecting global health as well. At the same time, travel and tourism are vital for local economies, and to foster those, testing has to be made entirely frictionless, which is our mission," he added.

Check out more news and information on COVID-19 Rapid Test in Science Times.