In core samples taken from glacier ice in Tibet, a team of microbiologists discovered 33 distinct viruses dating back to the Pleistocene. They believe the viral communities were active on glacier surfaces before they were frozen. Some of them are still active within the ice cores.

The Guliya viruses discovered in the ice cap are assumed to have infected the microorganisms that lived on the same ice. The researchers aren't sure when those infections occurred-whether they were most active before the ice cap arose or only thrived after it did. Their comprehensive study of the viruses' ecology was published in the journal Microbiome recently with the title "Glacier Ice Archives Nearly 15,000-Year-Old Microbes and Phages." 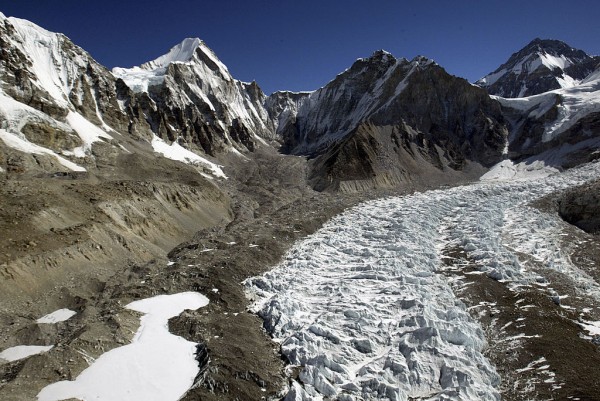 (Photo: Paula Bronstein/Getty Images)
EVEREST HIMALAYAN RANGE, NEPAL - MAY 15: An aerial photograph of the Khumbu Icefall and Everest's West Shoulder, including Changtse at 5200m Khumbutse-6640m May 15, 2003, on the Nepal-Tibet border. A record 1,000 climbers plan assaults on the 8,850-meter (29,035-foot) summit of Mount Everest to celebrate the 50th anniversary of the first successful assault on the World's tallest mountain on May 29, 2003.

Germs Melting Out in Glaciers Due to Climate Change; Should We Worry?

The researchers were able to ascribe different bacterial hosts to some of the viruses based on their genomes. According to the researchers, climate change means that germs are melting out of their stasis in the glaciers, which might be harmful in several ways.

According to a new study, such melting will not only result in the loss of those ancient, archived bacteria and viruses. Still, it will also release them into the environment in the future.

The team's cores were wrapped in plastic and placed in aluminum-encased cardboard sheaths. They were then transported out of the ice cap in freezers by truck, plane, then truck. It's now stored at -22 degrees Fahrenheit. These are presently kept at a chilly -30 degrees Celsius at The Ohio State University's Byrd Polar and Climate Research Center (-22 degrees Fahrenheit). Those cores and the viruses that reside within them are unlikely to pose harm to us.

Around 28 of the 33 viruses found in the ice were novel, which means they had never been reported by scientists before. The frozen viruses were from bacteria-infecting viral families. The team identified the viral elements after decontaminating the ice in a multi-step process. After scraping the ice cores' surfaces with a sterilized saw in a lab setting, they cleaned them in ethanol, and water exposed them to UV light. The core samples were then filtered, condensed, and genetic material was sampled. The virus gene sets in a commonly known database from NCBI were compared to the genetic material discovered.

Approximately half of the viruses showed genetic markers indicating that they were designed to survive cold ages. "These are viruses that would have thrived in extreme environments," Sullivan said in a press release. "These viruses have signatures of genes that help them infect cells in cold environments-just surreal genetic signatures for how a virus is able to survive in extreme conditions."

"These glaciers were formed gradually, and along with dust and gases, many, many viruses were also deposited in that ice," said Zhi-Ping Zhong, lead author of the study and a researcher at The Ohio State University Byrd Polar and Climate Research Center, in the same release. "The glaciers in western China are not well-studied, and our goal is to use this information to reflect past environments. And viruses are a part of those environments."

On the one hand, there's a potential that melting glacier ice will release active viruses into the world that hasn't been seen since the Pleistocene. On the other hand, frozen biomasses are often in such minuscule numbers that the outside world, rather than the other way around, poses a hazard to them, as reported by Vice.

The researchers believe that the resident viruses may still be active in the glacier based on the amount of genetic evidence revealed in the cores. It's also plausible that so much viral material wound up in the ice that enough was available thousands of years later for extraction and sequencing.