AccuWeather recently said that this week, a pair of meteor showers would appear in the night sky, a rare occurrence to experience during the warm summer.

These showers, known as the Southern Delta Aquariids and the Alpha Capricornids, are expected to peak Wednesday night and early Thursday morning.

According to a USA TODAY report, as per the Griffith Observatory, 12 faint meteors per hour will be produced by the Southern Delta Aquariids on average.

According to EarthSky, the best time to see the twin meteor showers is one to two hours before sunrise.

The American Meteor Society, on the other hand, predicted that the Alpha Capricornids would generate around five brilliant, powerful shooting stars every hour.

The AMS noted that, despite its powerful feature, it is not particularly strong and seldom generates more than five shower members each hour.

The Alpha Copricornids shower is notable for producing several brilliant fireballs throughout its active phase, according to AMS.

ALSO READ: Don't Miss Perseid Meteor Shower This Year! Will It Produce Up to 100 Meteors an Hour this August? 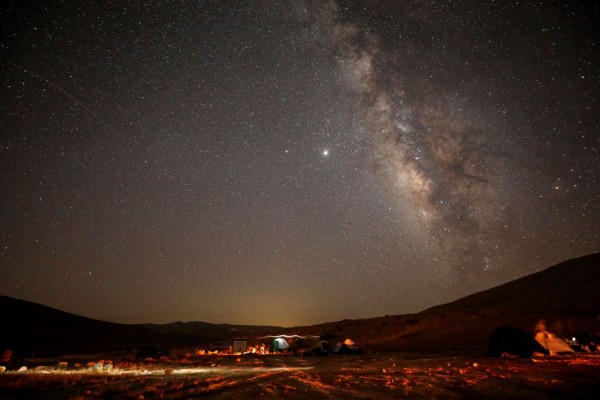 (Photo: MENAHEM KAHANA/AFP via Getty Images)
A Perseid meteor streaks across the sky above a camping site at the Negev desert near the city of Mitzpe Ramon on August 11, 2020, during the Perseids meteor shower, which occurs every year when the Earth passes through the cloud of debris left by the comet Swift-Tuttle.

In June, Yahoo! News reported the most recent meteor shower, the Eta Aquarids, in early May. However, many of the East Coast sky watchers missed out because of the widespread clouds.

The upcoming meteor showers will now give those who missed the previous occurrence the opportunity to watch not just one but two showers, which will combine for roughly 15 to 20 meteors per hour, the AMS said.

The rate would be comparable to a shooting star every few minutes, although the exciting part of the Alpha Capricornids, as earlier mentioned, is the number of bright fireballs produced during the shower's activity period. Meaning, some meteors could light up the whole sky as they burn up through the Earth's atmosphere.

The twin meteor showers are a reason enough for sky watchers and stargazers to look forward to witnessing the Perseids that will occur in the middle of August, which, this Yahoo! News report said, is one of the best meteor showers of 2021.

According to AccuWeather, the ultra-bright fireballs could light up the whole sky in an instant. Meanwhile, the moonlight could outshine some of the blurry meteors the moment the moon rises by midnight.

Therefore, AccuWeather recommends that skywatchers keep their eyes off the moon "at all times," and go to a dark site, away from city lights, to take full advantage of the viewing conditions.

What Comes After the Twin Meteor Showers?

After the double meteor shower, another event to look forward to is the August Perseids which EarthSky recently ranked as its "all-time meteor shower."

This August sky-event happens during what the website describes as the "lazy, hazy days of northern summer," when most people are on vacation.

Wherever an individual is,  this year's Perseid meteor shower will produce the most incredible amount of meteors on August 11, 12, and 13 in the morning.

As specified in the EarthSky report, there will definitely be no moon to disrupt such an exhibition on the peak mornings this year, specifically in the early morning hours most meteors will be flying.

Information about Twin Meteor Showers is shown on Nemesis Maturity's YouTube video below: