Honeycomb Structures: Bees Keep Honey in Shapes Other Than Hexagons

Whenever a person is asked what a honeycomb looks like, chances are you'll get the image of a yellow hexagonal lattice. However, a new study reveals that when their location does not allow for perfect hexagons, bees adapt to more architecturally suitable structures.

A new study from three researchers used the latest automated image analysis systems to examine how bees adapt their combs into irregular spaces. They discovered that by making small adjustments from the start of the building process, they could accommodate the regular hexagonal lattice they're known for, planning their honeycomb designs and preventing larger adjustments down the road. They present their findings in the report "Imperfect comb construction reveals the architectural abilities of honeybees," set to appear in the August 2021 edition of the PNAS journal. 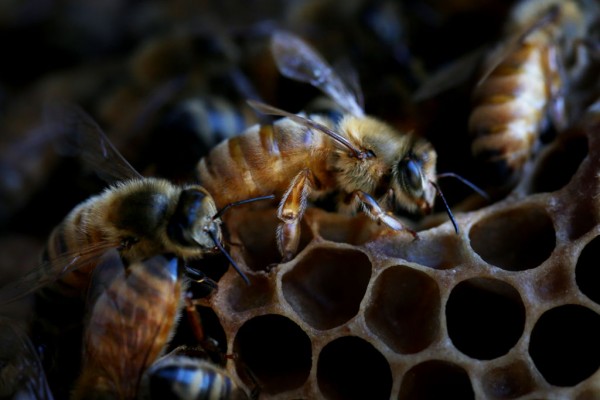 (Photo: Photo by Lisa Maree Williams/Getty Images)
SYDNEY, AUSTRALIA - MAY 18: Bees are seen on a honeycomb cell at the BEE Lab hives at The University of Sydney on May 18, 2021, in Sydney, Australia. The BEE Lab researches the behaviour, ecology and evolution of bees combining work in both the lab and the field.

Bees are often lauded for their extraordinary abilities in construction and architecture, with every cell in the comb being a regular hexagon or a six-sided figure with each side. What makes this more interesting is that these hexagons take different sizes to accommodate different hive members. A 2016 study in the Nature journal even suggested that the exact character of a honeycomb in construction depends on the collective behavior of the hive.

Now, in the new study, honeybees are the focus of the new effort, especially their regular hexagonal lattice builds that have been noted by humans as early as the fifth century CE. Furthermore, more recent examinations of the honeybee combs show that cells are highly regular, with each side of every hexagon showing little variation with respect to one another. What makes this impressive is that honeybees maintain this consistency despite a number of natural challenges. First, different worker bees work together to build the honeycomb, eliminating the possibility of consistency being the fruit of the same worker. Another point is that nests generally require at least two honeycombs of different sizes, accommodating worker bees and drones, or male bees mating with the queen for reproduction. The last challenge that impressed researchers over the years is that creating a beehive starts from different sides of the target site, and each part makes its way to the middle.

To finally understand how honeybees adapt to irregular locations with their impressive hexagonal lattice structures, animal behavior specialist Michael Smith from Auburn University teamed up with two computer scientists from Cornell University, Nils Napp and Kristin Petersen, who are currently working on robots that are basically mechanized insects. Together, they generated an image analysis software especially designed to identify where each cell ends and begins, finding the nature of each cell based on characteristics such as the number and measurement of each side. Then, they could be classified on whether they housed workers or drones or if they were used for something else.

Researchers additionally found that cells in a honeycomb were allotted for most-needed offspring, who later grow into worker bees. Additionally, the study revealed that connecting the different honeycombs was more challenging than allotting for different classes of honeybees. The image analysis software revealed cells that were not hexagons, from quadrilaterals to nine-walled cells. These irregular cells, however, were rare - accounting for only five percent of the cells, as noted in the press release from Cornell.

Check out more news and information on Bees in Science Times.