Brain-Computer Interface Developer Announces Entry to Clinical Trials for Its Implants in the US; FDA Authorizes Test of Device in Human Patients

New York-based Synchron Inc., a brain-computer developer, recently announced it had received the Food and Drug Administration approval to enter clinical trials for its implants in the United States.

According to a Bloomberg report, the company's entry to clinical trials for its device is a big step headed for the futuristic machines into more skulls to help treat conditions, like paralysis in particular.

The clinical trial, known as an initial feasibility study, is vital to proving that the implants are effective and safe, and they could one day be available in the US market.

A similar report from Engadget through Yahoo! News, Synchron went ahead of other brain-computer developers, including Elon Musk's Neuralink, to announce it had obtained regulatory approval for tests of its commercial product in human heads.

ALSO READ: Silver and Zinc Oxide's Ability to Penetrate the Blood Brain Barrier Dictated by Its Form and Shape 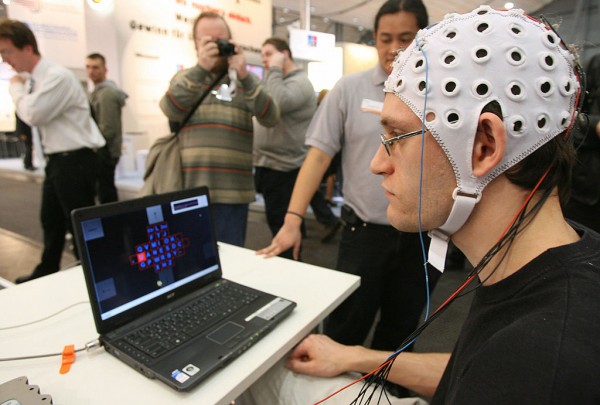 (Photo: JOHN MACDOUGALL/AFP via Getty Images)
An engineer used a Brain-Computer Interface (BCI) to communicate with a computer at the CeBIT trade fair in Hanover on March 6, 2008.

Commercial brain-computer interfaces are somewhat a new area for the FDA, this Bloomberg report specified. The agency said it is planning to hold a webinar on Thursday to provide additional guidance on topics like how to design proper clinical trials.

Following the announcement from Synchron, venture capitalists are suddenly keen to grasp technology. Research firm PitchBook said, so far in 2021, brain-computer start-ups have been able to raise $133 million.

The said amount had already exceeded the capital raised in 2020 and is by far the highest amount since 2017, the year when Neuralink reportedly took in $107 million. Just a week ago, this same report said it raised $20 million.

Synchron has performed multiple tests already of different sorts, which include an earlier trial in Australia that included four patients.

According to Thomas Oxley, Chief Executive Officer of Synchron said, there's an array of safety concerns that have not been dealt with before.

The company official added, one of these concerns is cybersecurity, which is a major part of discussions "we have been having."

Synchron is also planning to place in the brain, Stentrode, a device smaller than a matchstick to help paralyzed patients control digital devices like computer cursors using their thoughts.

The implant works through communication via a small wire with a second implant in the human chest. Then, a transmitter sends signals to a computer outside the body, close to the patient.

Later this year, the company plans to sign up six patients in its US clinical trial, which is roughly similar to a phase II clinical trial for a drug.

Unlike many other implanted BCIs that necessitate brain surgery, the Stentrode device gets implanted through a blood vessel at the neck's base and is manipulated toward a vessel in the brain.

If successful, this clinical test of Synchron could move to the next level in its years-long approval process. Mocco approximated that a Synchron device could be on the market in roughly three to five years.

Information about Synchron's Stentrode device is shown on Synchron Inc.'s Youtube video below:

Check out more news and information on Brain and Tech & Innovation in Science Times.