Andromeda Galaxy: How the Most Detailed Radio Imagery of the Galaxy Was Taken by the Sardinia Telescope

The Andromeda galaxy is famed for being one of the most popular large galaxies in our Milky Way at 6.6GHz microwave frequency. For generations, the astronomy society has obsessed over the galaxy's properties; thanks to the Sardinia Radio Telescope, the most detailed radio imagery of the Andromeda Galaxy is now at hand.

What is the Andromeda Galaxy? 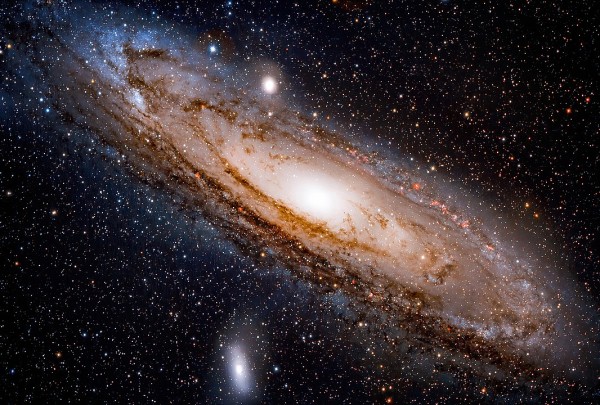 Recently, researchers have conducted studies of stars, black holes, and various celestial objects within the galaxy. A stunning Andromeda galaxy mosaic was taken by the Hubble Space Telescope in 2015.

The spiral galaxy, much like the Milky Way, contains a high concentration of bulge matter in its core, surrounded by various disks of stars, dust, and gas. Despite the Andromeda containing roughly a trillion stars compared to the 250 billion in our galaxy, the Milky Way remains more massive, mostly due to the hypothesized presence of dark matter.

According to EarthSky, to the naked eye, the Andromeda Galaxy would look like a smudge of light bigger than the observable full moon.

The Sardinia Radio Telescope is a 64-meter single-dish radio telescope equipped with state-of-the-art capabilities which allow extreme efficiency of up to 115Ghz. The versatile instrument used for radio astronomy, space, and geodynamical studies can be operated either via single dish or Very Long Baseline Interferometry mode.

The telescope's optical systems are based on quasi-Gregorian dish antennas with mirrors that are configured to minimize standing waves that bounce in between two reflectors. Three additional mirrors are used in a Beam Wave Guide configure which increases the focal positions.

Sofia Fatigoni, a Ph.D. student at the University of British Columbia's Department of Physics and Astronomy, says that the new images provided by the Sardinia Radio Telescope would allow researchers to analyze the structure and contents of the Andromeda galaxy in greater detail than before Sci-News reports.

She adds that understanding the physical processes of nature that take place inside the Andromeda allows researchers to further understand what occurs in the Milky Way Galaxy as if they are looking at our galaxy from the outside.

The study published in the journal of Astronomy & Astrophysics, entitled "Study of the thermal and nonthermal emission components in M 31: the Sardinia Radio Telescope view at 6.6 GHz⋆" is the first study to map such a large region of the space surrounding the Andromeda Galaxy, let alone use microwave bad frequencies from 1 GHz to 22 GHz.

Professor Elia Battistelli, the co-author of the study and an astronomer at the Sapienza University of Rome, says that the combination of the new detailed radio images with previously acquired observations has propelled researchers in clarifying the nature of the galaxy's microwave emissions, allowing them to distinguish various physical processes.