A brain monkey has recently been revealed in an invention that could lead to potential treatments for human illnesses like Parkinson's Disease.

According to a Mail Online report, the high-resolution 3D image, specifically of a macaque monkey brain, is shown in a detailed map created by a team from the Beijing-based Chinese Academy of Sciences through the use of fluorescent imaging methods.

Through the use of a new technological approach, the team was able to show how the nerve cells are organized. They were able to present how these cells are connected inside the monkey brain at a micron resolution.

The team, which includes researchers from Zhejiang University, explained that having such a detailed map of a monkey brain will help understand further human illnesses.

This new imaging approach enabled the team to map the monkey brain's every neuron and fiber in greater detail compared to earlier possible.

ALSO READ: Human Food Can Be Easier for Dogs to Eat and Digest, Recent Study Shows 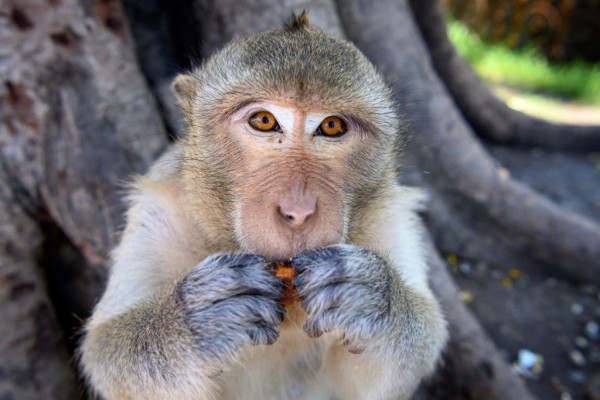 (Photo: MLADEN ANTONOV/AFP via Getty Images)
Researchers tested a new process on three 10-year-old macaque monkeys. They said this approach could work on other organs in the body.

The human brain includes almost 100 billion nerve cells with delicate and complex connections, and while a maximum of 17 times larger than a macaque brain, it is similar enough to be compared between the two.

This report also said, until now, the brain of a mouse was the largest to be mapped, taking several days to complete the creation of a 3D image.

However, through this new technique, it became possible to move up to a monkey brain, specifically that of a macaque's, roughly 200 times larger in terms of volume than that of a mouse.

In their study, High-throughput mapping of a whole rhesus monkey brain at micrometer resolution, published in Nature Biotechnology, the team was able to peer down to the single micron level, observing brain cells usually 100 microns across detail levels never-before-seen in a primate brain.

As indicated in their study, the researchers produced massive images, espousing more than a petabyte of data or equivalent to 30 million high-definition movies.

With billions of neurons taken in unique detail, the researchers turned to artificial intelligence or AI to examine their results.

To capture the said detail, the team developed a new technique known as Volumetric Imaging with Synchronous on-the-fly scan and Readout or VISoR.

Compared with the 3D optical imaging techniques used, VISoR eliminates the time loss from moving and pausing while it switches fields of view.

Meaning, they can complete a 3D image of a much larger brain compared to the earlier possible, explained the researchers.

With this new technological approach, the researchers said they could take a monkey brain's full image in less than four days, about the same time it formerly took to take images of a full mouse brain, which, as mentioned, is 200 times smaller.

In a similar report, the South China Morning Post said, the researchers tested the process on three 10-year-old macaque monkeys. They said this approach could work on other organs in the body.

The use of VISoR may be extended to capturing images of other organs and tissues, which include clinical pathology specimens.

Moreover, through the combination of the obtained massive imaging data and the AI analysis, it is projected that such an approach may help understand the brain and body's fine 3D structure, not to mention the manner they are changing in several diseases conditions.

According to Duan Shumin, the study author, they're hoping this technology will be further improved for more comprehensive and larger-scale applications to provide important contributions to the understanding and mapping primates and, sooner or later, the human brain.

Related information on monkey brain is shown on TomoNews US's YouTube video below:

Check out more news and information on Monkeys on Science Times.