The universe holds so many secrets, and many of them are too beautiful to miss. Scientists have captured stunning photos of the universe using observatories that served as humans' eyes to see all the wonderful phenomena that happen in the vast cosmos. An example of that is the colorful Cassiopeia A, the 300-year-old remnant of a supernova.

The image of Cassiopeia A was captured in the early 2000s and was shared by NASA in 2005. The image shows different colors of intensity during a supernova that likely happened centuries ago. NASA reshares this stunning photo in their Instagram account. 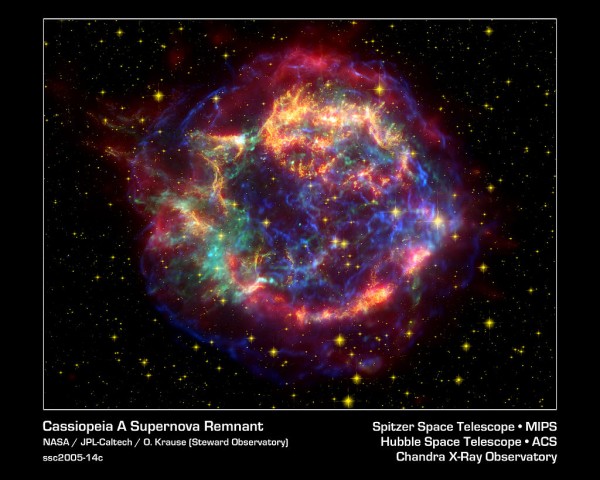 (Photo: Wikimedia Commons)
This stunning false-color picture shows off the many sides of the supernova remnant Cassiopeia A. It is made up of images taken by three of NASA's Great Observatories, using three different wavebands of light.

Breathtaking Image of Cassiopeia A Is a Kaleidoscope of Color

Recently, NASA uploaded on its Instagram account a colorful photo of Cas A that was met with positive comments by its followers. News18 reported that the image shows shiny colorful lights forming beautiful colorful bulbs without its outer glass.

NASA described the image as "A kaleidoscope of color" in its caption. The US space agency added that the Cassiopeia A was a supernova remnant from 11,000 light-years away from the Solar System. It showed red, yellow, green, and blue colors that represent the distinct inputs from the three NASA observatories.

According to Britannica, Cassiopeia A is the strongest source of radio emission in the universe that is located in the direction of the constellation Cassiopeia. The light from the supernova was estimated to had reached Earth about 300 years ago, between 1662 and 1700.

Today, it is still observable under the visible, infrared, and X-ray wavelengths and appears to be expanding by approximately five arc minutes in diameter. A neutron star can be seen at the center of the supernova remnant, which scientists said was the first one detected to have a carbon atmosphere.

NASA JPL wrote on their website that the neutron star was surrounded by a shell of material that blasted when the star died. It is also the latest supernova in the Milky Way galaxy and the most studied so far.

Check out more news and information on Supernova in Science Times.