Scientists predicted how many supernovas, or exploding stars, are out there. Still, our optical observatories (such as the Hubble Space Telescope) are not detecting as many as they should be in the distant universe. The study titled "A Spitzer Survey for Dust-Obscured Supernovae," pointed it out to dust.

NASA said that a supernova is a large, brilliant, and blustery event that occurs after a star's existence. Findings are based on NASA's now-defunct Spitzer Space Telescope to uncover five previously unknown supernovas in dusty galaxies. 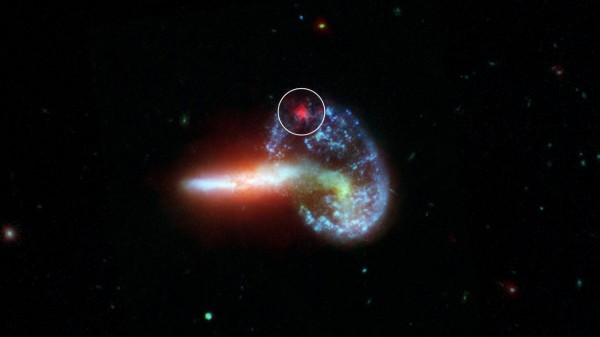 (Photo: NASA/JPL-Caltech)
This image shows galaxy Arp 148, captured by NASA's Spitzer and Hubble telescopes. Inside the white circle is specially-processed Spitzer data, which reveals infrared light from a supernova that is hidden by dust. Supernovae are massive stars that have exploded after running out of fuel. They radiate most brightly in visible light (the kind the human eye can detect), but these wavelengths are obscured by dust. Infrared light, however, can pass through dust.

Spitzer noted the universe in infrared light, which allowed the telescope to see past dust clouds that blocked the vision of optical telescopes.

Spitzer's findings reveal that optical surveys miss up to half of the star explosions that occur in the cosmos, lead author Ori Fox said in a NASA statement on Wednesday.

The Spitzer investigation discovered that all of the exploding stars had the same outcome, NASA explained. As big stars age and their interiors are filled with iron, these celestial bodies can no longer generate enough energy to maintain their own weight. Hence, their cores collapse violently. The stars' last acts were characterized by the space agency as "blowing themselves to smithereens."

The "supernova discrepancy," that is, the disparity between the number of projected supernovae and the number detected by optical telescopes, does not exist in the local cosmos, Phys.org said. There, galaxies have halted their star product and are less dusty in general. Galaxies in the furthest reaches of the cosmos, on the other hand, seem younger, develop stars at a faster pace, and contain more dust. Optical and ultraviolet light are absorbed and scattered by this dust, preventing them from reaching telescopes. As a result, scientists have long assumed that the missing supernovae must occur but are just undetected.

Fox said in the same report that observers could only note the anticipated numbers of supernovae with normal optical searches because the local cosmos has slowed down a bit since its early years of star-making.

As scientists move further out and back to cosmic epochs when dustier galaxies prevailed, Fox said, the measured supernova-detection percentage decreases.

Fox added that the researchers' intuition proved true when the five never-before-seen supernovae came to (infrared) light. He added that Spitzer was able to pick up the signal of concealed supernovae from these dusty galaxies is a testimony to the telescope's discovery potential.

The finding of hidden supernovas will provide something to look for when the next generation of infrared space telescopes, like that of James Webb, survey the cosmos. CNet said NASA decommissioned Spitzer in early 2020 after nearly 17 years of service.