A self-proclaimed time traveler on TikTok claims that a massive meteor shower would occur in the northern hemisphere for two weeks, bearing the Nozic message.

The 'time traveler' claims to want to 'save mankind' and has over 3.9 million likes and 611,000 subscribers on the app.

A film has been shared on the site by user @aesthetictimewarper, indicating that a Perseid meteor shower would reach Earth on Wednesday, August 11.

Perseid Meteor Shower To Kick Off War? Is It True?

The TikToker stated that the user is a true time traveler from the year 2714 and that something extraordinary occurs on that date.

According to the self-proclaimed time traveler, one of the meteors will appear to be different from the rest since it is a spacecraft arriving on Earth, kicking off the first Nozic War preparations.

The TikToker uploaded the video two days ago and has already received over 300,000 views and almost 12,000 likes.

Users, as you might expect, were quick to express their thoughts in the comments area.

Here Are Other Claims That This Time Traveler Said 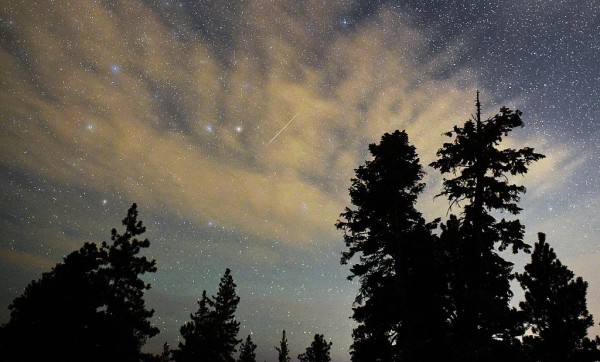 (Photo: Ethan Miller/Getty Images)
SPRING MOUNTAINS NATIONAL RECREATION AREA, NV - AUGUST 13: A Perseid meteor streaks across the sky above desert pine trees on August 13, 2015, in the Spring Mountains National Recreation Area, Nevada. The annual display, known as the Perseid shower because the meteors appear to radiate from the constellation Perseus in the northeastern sky, is a result of Earth's orbit passing through debris from the comet Swift-Tuttle.

Last July, TikToker @aesthetictimewarper encouraged its followers to markdown five upcoming dates that they thought may be of interest to them.

Tiktoker said on its footage that many of its viewers still do not think the user is a true time traveler in an attempt to respond to their critics. Hence, the netizen requested that its followers or anybody who viewed the video keep these five dates in mind.

NASA "will discover" a mirrored Earth with opposing gravity, physics, and motion, according to Tiktoker. Was this confirmed, though?

Anyway, the TikToker added that a Category 6 storm would strike South Carolina on September 14, 2021, making it the worst hurricane.

Humans will acquire superpowers from strong energy from the Sun by October 20, the TikToker claimed.

Three teenagers, according to the TikToker, might a T-Rex egg and a technology to open a gateway to another dimension on December 14.

On February 2, 2022, the Atlantic Ocean will be home to human-fish life, the Tiktoker claimed.

According to Science Times, certain circumstances may persuade you not to wait until 2022 or 2023 to view this celestial event this year.

The Perseid meteor shower, according to NASA, might be your best chance to do some summer skywatching in a few years.

The space agency predicted a full moon and reduced meteor activity at the height of the Perseids next year. A crescent moon in the sky in 2023 may hinder your viewing pleasure.

This isn't the first time the moon has obscured a meteor shower's best view. In 2014, a rare supermoon coincided with the peak viewing of the Perseids, according to ABC News.

NASA TV and the space agency's social media platforms will broadcast live coverage of the Perseid meteor shower. The live broadcast will be available on NASA's Facebook, Twitter, and YouTube accounts from August 11 to 12. NASA will broadcast the meteor shower live throughout the night.

With 50 to 100 fast and bright meteors seen every hour, the Perseids are one of the most common meteor showers. The Perseids, according to SlashGear, "will emerge in the sky as fast little streaks of light." It's a sight to behold, and you might want to grab a photo or two.

RELATED ARTICLE: Celestial Events to Keep an Eye for the Month of August 2021: Comets, Asteroids, and More!