Wildfire Smoke That Affects Droplet Formation in Clouds May Lead to Less Rain, Worsening Dry Condition in Western US

A Phys.org report specified as heatwaves and wildfires is stressing the western United States, worries about drought increases.

Dry landscapes are burning faster, and rain can help control the already-raging fires. However, wildfire smoke may keep that much-needed rain from falling.

When the smoke coming from wildfires goes up into the atmosphere, small particles also fly up with it. Water droplets can then condense in the cloud particles.

The study's authors expected a rise in the number of water droplets that form in the clouds caused by wildfires, as more particles are generating more droplets. 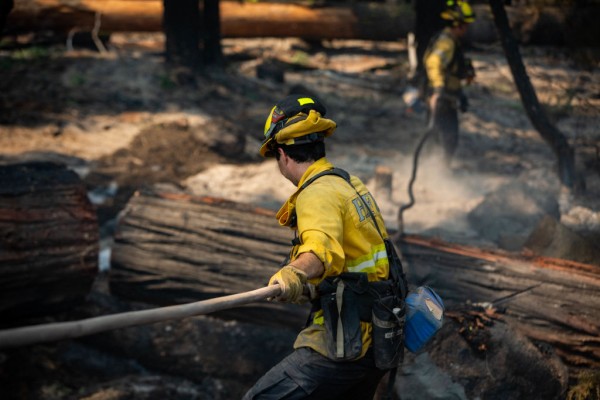 (Photo: Maranie R. Staab/Getty Images)
A firefighter makes his way day a mountainside before extinguishing a small blaze on August 9, 2021, near Westwood, California. The Dixie Fire, which has incinerated nearly 500,000 acres, is the second-largest recorded wildfire in state history and remains only 21 percent contained.

The Difference, Bigger than Expected

In their study, Biomass Burning Smoke and Its Influence on Clouds Over the Western US, published in Geophysical Research Letters, the researchers found that the difference between smoky and clean clouds hosting roughly five times the amount of droplets compared to their clean equivalents.

In addition, smoky droplets were also found to be half the pristine droplets' size. The difference in size is what could stop the falling of drops.

As indicated in the study, since tiny droplets are less likely to develop and sooner or later fall out as rain, wildfires in the western US could mean there's less rain during the wildfire season.

According to atmospheric scientist Cynthia Twohy at NorthWest Research Associates and Scripps Institution of Oceanography, they were surprised at how effective the said organic particles formed cloud droplets and their large effects on clouds microphysics.

Twohy, the study's lead author added, she started thinking about the long-term effects of this occurrence considering the drought, and there's a lot of wildfires that increase over time.

In clouds reaching high into the atmosphere, adding more particles can stimulate and enliven the clouds and bring rain, although according to the lead author, the opposite is true for low-attitude cumulus clouds as the ones she studied.

Backing the new results, previous research unrelated to this study showed akin changes in the size and concentration of droplets related to smoke in the Amazon.

A similar Mirage News report said atmospheric chemist Ann Marie Carlton from the University of California-Irvine said, what really excited her about this research were the links to the hydrological cycle.

Carlton, who's not part of the new study added, observed differences in the size and precipitation of the cloud droplets and the formation of clouds, which definitely affects the hydrologic cycle.

Twohy noted cloud microphysics are complex that other than droplet size, there are factors to consider for the smoky clouds' overall impact on regional climate.

If wildfire smoke makes rain less possible, dry conditions and more wildfires could be more typical in the future. More so, cloud microphysics are complex, thereby taking more time before such links are clear.

Regardless, in associating wildfire smoke with changes in clouds and, tentatively, rain, this new research of Twohy is pushing atmospheric physics and chemistry to

Carlton added that humans had agitated the atmosphere's composition; no one has ever known about all these interactions and feedback.

Related report on wildfires in the Western US is shown on DW News's YouTube video below: