Spot Robotic Finds Rival in Xiaomi's Much Cheaper CyberDog That Follows Its Owner, Performs Other Tricks Like Begging and Shaking Paw

Chinese tech firm Xiaomi recently launched the "CyberDog" that can follow its owner-operator, go through obstacles and perform other tricks such as shaking a paw and begging, among others.

Many people say, as indicated in a Mail Online report, every dog has its day, although for Spot, the so-called "oft-dancing robot canine" developed by Boston Dynamics, entry of a new competitor seems favorable.

CyberDog, as described in this report, boasts a reasonable price tag of $1,540, much cheaper than the whopping price of $74,500 of Spot. 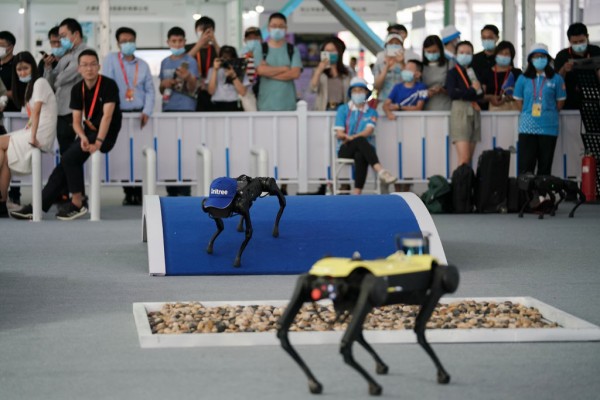 This four-legged robot of Xiaomi is also a little smaller and much lighter as it stands only a little over 15 inches and weighs 31 pounds, compared to the 24-inch-tall and 72-pound weight of Spot.

This, incorporated with what the Mail Online report calls "powerful servo motors," provides the CyberDog with a top speed of 7.2 MPH, roughly double the 3.5 MPH of spot, not to mention the ability to perform backflips.

As earlier mentioned, with both voice and remote control, Xiaomi's robot canine can follow its owner, navigate through obstacles and carry out tricks which include begging and shaking a paw.

Moreover, the CyberDog's open source will allow the developers to construct the design and customize it. It even enables them to add hardware to be appropriate with different kinds of applications.

TechRadar said this new invention is not the only more cost-efficient robotic rival of Spot in the market in a related report. In 2020, Unitree, another Chinese tech firm, launched the small "Go1" with a $2,700 selling price.

As for Xiaomi's CyberDog, according to ZDNet, the company said in a press release, it's its first venture into quadrupedal "robotics for the open-source community and developers" worldwide.

The firm also said enthusiasts of robotics who are interested in CyberDog could either compete or co-create with other similar-minded fans of Xiaomi and impelling the creation and potential of quadruped canine robot canines.

The developers explained, to this end, they are instituting a "Xiaomi Open Source Community" by which global developers can share upgrades to this robotic creation.

This company located in Beijing has promised to put up a robotics laboratory to provide a platform for engineers to carry on the quest for future innovations.

Xiaomi also said the CyberDog's first release would see the sale of just 1,000 units of the tech product with Xiaomi fans, roboticists, and engineers as the target market.

CyberDog is equipped with 11 high-precision sensors of different types, including GPS modules, touch sensors, multiple cameras, and ultrasonic transducers to navigate and interact with various environments like real-life animals, among others.

A spokesperson from the company explained, constructed upon this vision sensor system include self-regulating object tracking, synchronized localization and mapping, and navigation and avoidance of centimeter-scale obstacles.

Coupled with human position and tracking ability for face recognition, this new Xiaomi robot has the capability of following its owner and running around obstacles.