In its 142 years of keeping temperature records, the National Oceanic and Atmospheric Administration (NOAA) has officially reported July 2021 as the hottest month ever recorded.

"In this case, first place is the worst place to be," said Rick Spinrad, Ph.D., NOAA Administrator, in the environmental administration's news release.

"July is typically the world's warmest month of the year, but July 2021 outdid itself as the hottest July and month ever recorded," Spinrad added.

Spinrad stated that the new record of the hottest month is a testament to the "distrurbing and disruptive path" that the ongoing climate change has in store for the world. 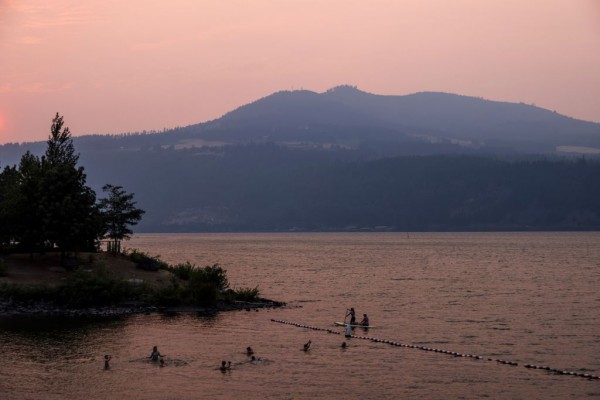 (Photo: Photo by MICHAEL HANSON/AFP via Getty Images)
Kids swim at the waterfront park at dusk in Hood River, Oregon, during an abnormal heatwave in the Pacific Northwest on August 13, 2021. - July was the hottest month ever recorded, according to data released by the National Oceanic and Atmospheric Administration (NOAA) on August 13, 2021.

July 2021: Officially the Hottest Month Ever

Following extreme heatwaves sweeping parts of Europe and the United States, the world has logged an average temperature of 62.07 degrees Fahrenheit (16.73 degrees Celsius) last July 2021. The temperature surpasses the previous records reported in July 2016 and tied in 2019 and 2020, according to the NOAA, citing data from National Centers for Environmental Information (NCEI).

July 2021 also posted the highest temperature at an unprecedented record of 2.77 degrees Fahrenheit (1.54 degrees Celsius) above the average values recorded for the Northern Hemisphere. It effectively surpassed the previous record from 2021. Regionally speaking, the month was the hottest July for Asia, the second-hottest for Europe, making it into the Top 10 hottest Julys for the Americas, Africa, and Oceania.

The NCEI Global Annual Temperature Rankings Outlook also noted that these temperature records for July 2021 will definitely contribute to the entire year, making it to the Top 10 warmest years ever recorded. Furthermore, these NCEI reports also reflect the changes caused by climate change, including those outlined by the Intergovernmental Panel on Climate Change (IPCC) in an official statement.

In an infographic, the NCEI highlighted some of the most significant anomalies driven by climate change for July 2021. It included a substantial drop in the Arctic sea ice extent, 18.8 percent below the period average from 1981 to 2010, making it the smallest extent since 1979. Also, the month from January to July 2021 saw above-normal cyclone activities, producing more named storms.

"Scientists from across the globe delivered the most up-to-date assessment of the ways in which the climate is changing," Spinrad said in a statement in response to the IPCC report. He stressed in the statement that the IPCC report shows that human activities are mainly responsible for climate change.

Additionally, Spinrad committed that NOAA will be using the insights gathered from the IPCC report to better inform the work it does with communities to help them prepare, respond, and adapt to climate change.