A new report warns that "land-hungry" practices to achieve net zero carbon targets would cause disproportionately adverse effects like higher food prices and more hunger around the world.

According to Oxfam International, a global nonprofit that aims to fight inequality and poverty, relying on land alone to achieve the increasingly touted net zero carbon targets by 2050 would require about 4 billion acres (1.6 billion hectares) of new forest land. This alone is equivalent to a land area five times larger than India, or more than all farmlands in the world combined. 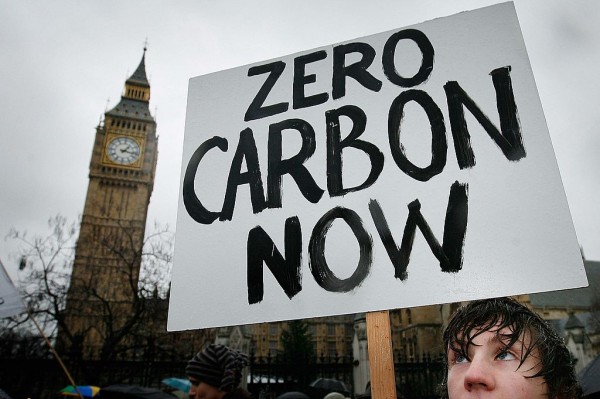 (Photo: Photo by Peter Macdiarmid/Getty Images)
LONDON - DECEMBER 08: A climate change protestor walks near Parliament on December 8, 2007 in London. Demonstrators are gathering in more than 50 countries around the world. The worldwide protests coincide with the UN Climate talks in Bali and are calling for urgent action from world leaders to prevent the catastrophic destabilisation of global climate.

Tightening the Net and the Distraction of Net Zero Carbon Targets

In the new report "Tightening the Net" the implications of net zero climate targets for land and food equity," Oxfam reports that several corporations and governments are "hiding behind unreliable, unproven and unrealistic 'carbon removal' schemes in order to claim their 2050 climate change plans will be 'net zero.'" Also, these organizations are failing to cut their emissions quickly or deeply enough to prevent climate breakdown. The nonprofit points out that the sudden trend of creating net zero carbon targets is dependent on large areas of land, planting trees which they hope would reduce greenhouse gases from the atmosphere.

The report also explains that if the world aims to limit global warming below 1.5 degrees Celsius (34.7 degrees Fahrenheit) to prevent the catastrophic effects of climate change, it should cut down carbon emissions by up to 45 percent by 2030 compared to 2010 levels. However, current plans only allow for a 1 percent reduction in global carbons by the year 2030.

The ongoing climate crisis is already wreaking havoc in parts of the world by affecting agriculture and driving humanitarian crises like migration and hunger - with the poor and vulnerable segments of society such as women farmers and Indigenous people bearing the brunt of the environmental changes.

"'Net zero' should be based on 'real zero' targets that require drastic and genuine cuts in emissions, phasing out fossil fuels and investing in clean energy and supply chains. Instead, too many 'net zero' commitments provide a fig leaf for climate inaction. They are a dangerous gamble with our planet's future," says Nafkote Dabi, Oxfam International's Climate Change Lead. She additionally explains that both nature and land-based carbon cutting schemes are important aspects of the complete efforts needed to reduce carbon emissions. However, Dabi notes that these plans must be "pursued in a much more cautious way." Also, with the existing plans, there's not enough land in the world to fulfill all of them, which in turn could lead to more instances of land grabs, human rights abuses, and hunger - which will then be used by polluters as an excuse to continue their actions.

Oxfam also recently reported the sharp increase in global food prices - at a staggering 40 percent over the last year that led to 20 million more people worldwide suffering from hunger as well as a six-fold increase in situations like famine. The nonprofit argues that if the current land-based carbon emission removal schemes continue, it could see global food prices up by about 80 percent by 2050, citing data from the IPCC.

The report also called out some of the net zero carbon targets as being vague and not standing on measurable plans.

Check out more news and information on Carbon Emissions in Science Times.