A new study examines the effect of various behavioral and ecological factors on honey bee venom, the material that makes bee stings painful yet known for various medicinal uses.

Researchers from Curtin University in Perth, Australia, analyzed the protein diversity in the bee venom produced by the western honeybee in the marri ecosystem located in southwestern Australia.

Bee venom is a material valued for its applications in treating degenerative diseases like Parkinson's and other conditions like osteoarthritis.

The Curtin University researchers present their findings in the article "Factors Driving the Compositional Diversity of Apis mellifera Bee Venom From a Corymbia calophylla (marri) Ecosystem, Southwestern Australia," appearing in the recent PLOS ONE journal. 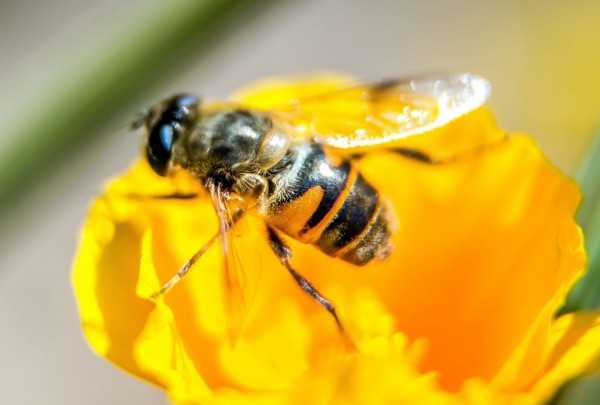 (Photo: Photo by PHILIPPE HUGUEN/AFP via Getty Images)
A picture taken on June 26, 2017, in Lille, northern France, shows a bee on a flower, as French Minister of Ecological and Inclusive Transition Nicolas Hulot said that he will not lift the bans to use a type of pesticides that are thought to be responsible for bees' high mortality rate and poisoning.

The study is led by Dr. Daniela Scaccabarozzi from the university's School of Molecular and Life Sciences and a research consultant at local analytical chemistry facility ChemCentre.

She explained that the research would benefit both human health and the beekeeping business, which sees a gram of bee venom sold for up to $300, a price range reflected by the American bee farm Bee Venom Lab.

"We found there are 99 bee venom proteins of which about one third had been formerly identified. The more proteins found in the venom, the higher the potential quality and effect," said Dr. Scaccabarozzi in a Curtin University press release.

She also explained that researchers had to examine different factors such as behavioral tendencies in honey bees producing the bee venom to better understand this protein diversity in it.

Researchers collected bee venom from the Italian bee (Apis mellifera ligustica), a subspecies of the western honey bee, over one flowering season of the marri (Corymbia calophylla).

They then examined these samples based on ecological factors such as temperature, humidity, the flowering index and stage of the marri, and the nectar production. They also examined management, nutritional supply and hive movement, and a host of behavioral factors.

The study covered 25 hives scattered across a 200-kilometer range in Southwestern Australia. Researchers then conducted a bottom-up proteomics approach in mass spectrometry to analyze the protein composition and densities in the sample.

The Effect of "Angry Bees" to the Bee Venom Produced

The researchers were able to find a "compelling behavioral factor" from an association between docile and active honeybees in the ecosystem. Basically, they discovered that the "angry bees," or those that exhibited a more intense response to the researchers' stimulation, were able to produce a richer bee venom, one that is denser in protein.

Dr. Scaccabarozzi explained that the bee venom quality might be affected by the so-called alarm pheromone secretion, which is a kind of chemical signal that induces other honey bees to react aggressively, causing them to sting in response.

She added that this might be caused by genetic changes that have something to do with their response to aggression.

Another significant factor is the environment, with the temperature directly affecting the protein composition of the collected bee venom.

Out of the 25 hives they inspected, they found that those located in places with higher temperatures had lower bee venom productions.

Check out more news and information on Honey Bees in Science Times.