Humans and bees are different creatures. However, despite their differences, they have surprising similarities in various ways. One of them is the way they are interacting socially.

A team of scientists at the University of Illinois Urbana-Champaign, building on their previous research, have experimentally measured honey bees' social networks and the manner they developed over time.

Reports on this new finding specify that researchers found that there are detailed similarities between humans' social networks, and such likenesses are completely explained by new hypothetical modeling, which adjusts the mechanisms of statistical physics for biology.

The said model validated in experiments specifies that there are distinct differences between honey bees, "just as there are between human beings."

Both Goldenfeld and Robinson are faculty, too, at the Carl R. Woese Institute of Genomic Biology at Illinois, of which the latter is the director.

This collaboration consisted of experimental gauges of social behavior of honey bees conducted by Hamilton, Gernat, and Robinson, with Rao doing the data analysis, and Choi and Goldenfeld doing the theoretical modeling and interpretation. 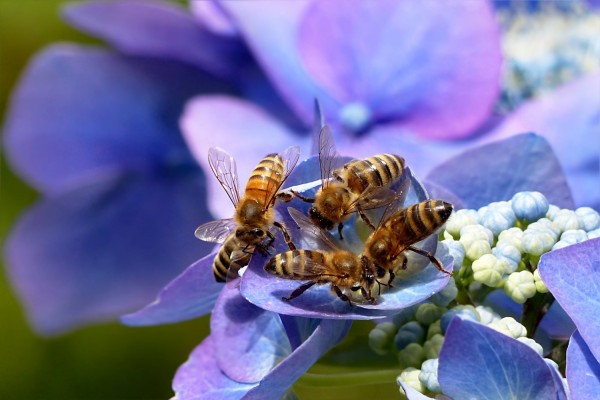 (Photo : Oldiefan on Pixabay)
A model validated in experiments, specifies that there are distinct differences between honey bees, “just as there are between human beings.”

The research findings were featured in a recently-published article in the Proceedings of the National Academy of Science journal.

Initially, Goldenfeld said, "They wanted to use honey bees as a convenient social insect" to help them discover more ways to gauge and think about multifaceted societies.

Several years back, Goldenfeld said he, Robinson, Rao, and Gernat collaborated on an extensive research putting bar codes on bees in order for them to automatically observe everywhere honey bees would live in the hive, "every direction in which they pointed, and every interaction pair."

This way, Goldenfeld added, a social network could be built in time, something recognized "as a temporal network."

In observing individual interactions, the times spent differed from short to prolonged interactions. Grounded on these observations, Choi developed a concept where bees showed a unique characteristic of attractiveness that could be akin to human interaction.

For instance, humans might opt to interact with friends or family members instead of strangers. Commenting on their study findings, Goldenfeld explained they developed a theory for this according to a simple notion.

This notion is that, if a bee interacts with another bee, he explained, one can consider that "as a sort of 'virtual spring' between them."

The strength of that spring, the study investigator said, is a gauge of how enticed they are to each other. Therefore, as specified in the study, if the spring is weak, then the bees are likely to break that spring quickly and to away, probably to look for another bee with whom they can interact.

But if the spring is strong, they then are likely to stay to interact longer. The study investigators call this a "theoretical description on minimal model" as it can quantitatively catch the phenomenon of interest minus needing excessive and unimportant microscopic realism.

Lastly, according to Robinson, looking into remarkable similarities between humans and bees stimulate interest in exploring universal principles of biology, as well as tools that underlie them.

Check out more news and information on Honeybees on Science Times.