Even though we're residing inside the Milky Way galaxy, astronomers have done some remarkable job figuring out what it looks like. It's a spiral galaxy with two major arms, as far as we know. But scientists found that the galaxy's minor arm is broken.

On Tuesday, NASA compared the break to a sliver protruding from wood. In a press statement, the space agency stated that this is the first significant structure found with an orientation radically different from others.

Young stars and a collection of nebulae, including the Eagle Nebula and the Lagoon Nebula, which are home to Hubble's iconic Pillars of Creation photo as shared by NASA, make up the structure that sticks out. Instead of hugging the spiral of the galaxy's Sagittarius Arm, the forearm protrudes at an unusual angle. 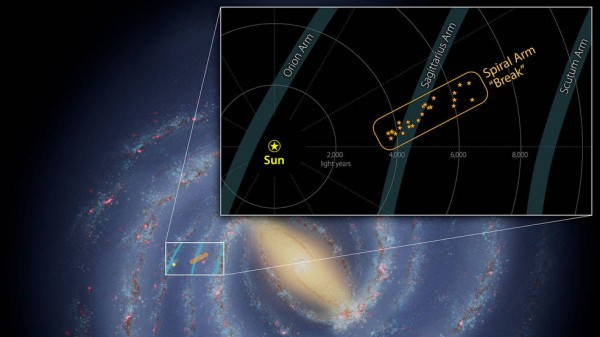 (Photo: NASA/JPL-Caltech)
A contingent of stars and star-forming clouds was found jutting out from the Milky Way's Sagittarius Arm. The inset shows the size of the structure and distance from the Sun. Each orange star shape indicates star-forming regions that may contain anywhere from dozens to thousands of stars.

To build a 3D view of the arm section, the researchers examined the data from the European Space Agency's Gaia space observatory and NASA's now-defunct Spitzer Space Telescope to find young stars and estimate distances from them.

SlashGear, citing NASA, said the splintered section of the arm extends about 3,000 light-years. Other spiral galaxies have been discovered to have comparable formations at 'break' places in their arms.

When scientists combined the Gaia and Spitzer data and saw this detail, study author Michael Kuhn said in a Phys.org report that there's a lot of intricacy in this region that wasn't visible before.

Similar features have been discovered in spiral galaxies seen by our telescopes, according to scientists. Spurs or feathers are the names given to these formations.

ALSO READ: Biggest Curl of Gas in Space Discovery Baffles Scientists As to What Exactly is This Structure in the Milky Way

Broken Arm Due to Carrying Too Much Workload, Scientists Say

NASA said in a SciTechDaily report that the stars in that region presumably originated simultaneously and in the same approximate location. The space agency added that different forces, like gravity and Milky Way's spin, affected the arm.

The "splinter" discovery has provided astronomers with a new viewpoint on the galaxy. Although it has characteristic spiral arms, not every star and nebula follows the rules.

University of Wisconsin-Whitewater astrophysicist and study co-author Robert Benjamin said in the same SciTechDaily report that the researcher serves as a warning that there are many uncertainties about the Milky Way itself. He added that there are many details they need to examine more if they want to understand the bigger picture. According to Benjamin, the broken arm is only a tiny part of the Milky Way. Still, he said it might provide important information about the entire galaxy.

RELATED ARTICLE: Several Solar Systems Are Facing Radioactive Decay, Another Mysterious Process Like in Ours