The Hubble Space Telescope of NASA/ESA recently published a stunning picture of NGC 1385. The galaxy is a spiral galaxy in the constellation Fornax, situated around 68 million light-years from Earth. Fornax means 'furnace' in Latin.

The galaxy is roughly 70,000 light-years across. Hubble's Wide Field Camera 3 (WFC3), which was installed when astronauts last visited Hubble in 2009, captured the image was captured by. The camera is still remarkably active after 12 years.

This image shows off the beautiful spiral galaxy NGC 1385, which is about 68 million light-years from Earth. It’s located in the Fornax constellation, which is the Latin word for furnace!

NGC 1385's arms may be seen along the sides and bottom, with the bright center revealing places packed with stars.

The galaxy is also part of the Eridanus Cluster, which is made up of around 200 galaxies. 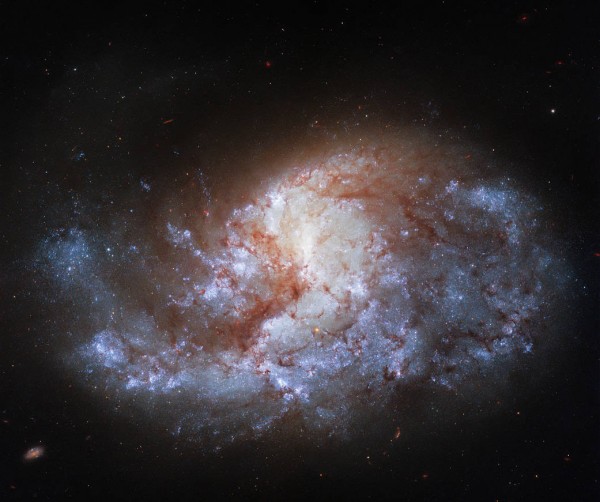 (Photo: ESA/Hubble & NASA, J. Lee and the PHANGS-HST Team)
This jewel-bright image from the NASA/ESA Hubble Space Telescope shows NGC 1385, a spiral galaxy 68 million light-years from Earth, in the constellation Fornax. The image was taken with Hubble’s Wide Field Camera 3, which is often referred to as Hubble’s workhorse camera, thanks to its reliability and versatility. It was installed in 2009 when astronauts last visited Hubble, and 12 years later, it remains remarkably productive.

De Lacaille was a prolific constellation discoverer and namer. He is credited with 14 of the current 88 constellations. Rather than naming constellations after old pagan gods, de Lacaille preferred to name them after scientific equipment. Atila, Norma, and Telescopium are among the constellations he named. These words mean "air pump," "ruler," and "telescope," respectively.

Harapan Rakyat, an Indonesian news website, said the constellation Fornax is located in the sky's southern hemisphere. Alpha, Beta, and Nu Fornacis are the three brightest stars of the constellation.

A total of 55 HI sources have been discovered. The background galaxy is the only one that does not belong to the Eridanus supergroup. Two huge HI clouds have been found.

NGC 1359 has a massive HI debris field that interacts with pairs of galaxies. It is also in direct line of sight with the spiral galaxy NGC 1385. This describes the source search algorithm's data product and introduces its fundamental parameters.

The existence of altered HI morphology in all observed galaxies implies that the subgroup is undergoing tidal interactions. The majority of galaxies in Eridanus lack HI. The group's HI-deficient galaxies are not located in the center.

Galaxies in the supergroup Eridanus defy the typical trend of atomic gas fraction against star mass scaling equations by discovering the facts.

This implies that scaling relationships fluctuate in response to the density of their surroundings. The vast majority of these galaxies are actively forming stars.

Mashable said the renowned Hubble Telescope is getting older, yet it's still generating stunning cosmic photos. Thanks to WFC3, the telescope's hardworking camera.

The James Webb Space Telescope, the most eagerly awaited next generation of the space telescope, is presently scheduled to launch on Halloween 2021.

Webb has a massive mirror, measuring approximately 21 feet wide, whereas Hubble's is just eight feet across. The resolution of deep-space objects improves with the size of the mirror. Watch out for the upcoming debut in the autumn.