NASA Astronauts Prepare to Upgrade the ISS Power System: How to Watch

The next spacewalk will be the fourth, following three previous spacewalks to attach the first pair of new iROSA arrays, the space agency said. On June 16, NASA astronaut Shane Kimbrough and ESA astronaut Thomas Pesquet attached the first in its folded configuration to a mounting bracket on the 2B power channel on the Port 6 Truss.

The pair traveled to the 2B power channel on June 20 to finish installation and deployment. On June 25, the duo finished the assembly and rollout of the second of the six new arrays during another spacewalk. 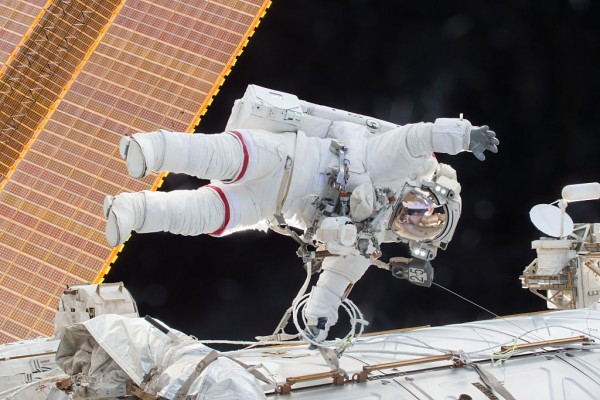 (Photo : NASA via Getty Images)
IN SPACE - DECEMBER 21: In this handout photo provided by NASA, NASA astronaut Scott Kelly is seen floating during a spacewalk on December 21, 2015 in space.

The space agency is adding more solar arrays to complete six of the space station's eight current power channels. NASA wants to ensure enough power for the agency's exploration technology demonstrations for Artemis and beyond and usage and commercialization. The panels in issue supply electricity to the US Laboratory, the Harmony module, and the Columbus module, among other station sections.

NASA said solar panels were initially intended to last 15 years, yet some have been used for more than 20 years. Although the arrays are still functioning, their efficiency is decreasing with time. Because of this and advancements in solar array technology, the new collections will produce more electricity than the previous ones, despite their smaller size.

If all six more arrays are constructed, the station's total useable output will grow from 160 kilowatts to a maximum of 215 kilowatts, according to KPVI.

The same roll-out solar array architecture will be used on Gateway, a new lunar-orbiting outpost constructed by NASA's commercial and international partners.

NASA TV will broadcast the spacewalk live. You may either view the video posted below on this page or go to the NASA website to learn more.

Coverage of the spacewalk will begin at 7 a.m. ET on Tuesday, August 24. The actual spacewalk is set to begin at 8:30 a.m. ET. It may go on for up to seven hours.

If you're truly interested in learning more, NASA will host a briefing the day before the spacewalk with further details. On Monday, August 23 at 2 p.m. ET, you may watch the briefing on NASA TV.