One of the reasons for the Artemis and its venture's delays is Blue Origin's lawsuit against NASA. Initially, it was thought that SpaceX had been granted the moon landing contract, which Blue Origin had bid for and hoped to obtain.

However, the space agency did not award the contract to Bezos and his crew. Hence, Blue Origin sued NASA in the Court of Federal Claims after an independent government body rejected its initial complaint about the contract.

Despite having selected SpaceX to lead the project, Blue Origin wrote an open letter to NASA and initially promised to reimburse NASA's $2 billion in unpaid expenditures in exchange for the contract. But NASA and SpaceX have not reacted to Bezos or made any public remarks regarding Blue Origin's announcement.

In an interview, NASA Administrator Bill Nelson told SpaceNews that the SpaceX Human Landing System (HLS) for the Artemis lunar mission had been put on hold. Blue Origin's case, which is still on the Federal Court of Claims, is the basis for this. 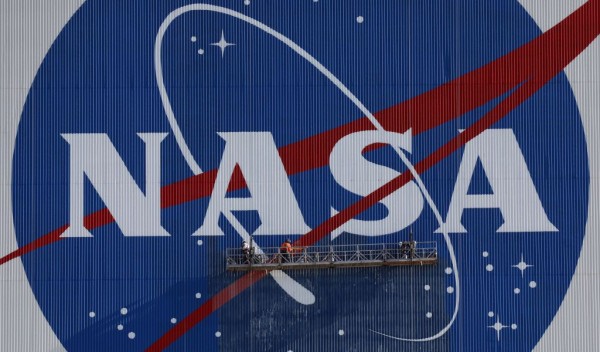 (Photo: GREGG NEWTON/AFP via Getty Images)
Painters refurbish the NASA logo on the Vehicle Assembly Building at the Kennedy Space Center in Florida in Florida on May 29, 2020. The faded 10-story-tall insignia was last painted 13 years ago. - The SpaceX Falcon 9 rocket with the Crew Dragon capsule is rescheduled to launch to the International Space Station on May 30, carrying astronauts Bob Behnken and Doug Hurley.

Hence, the U.S. space agency has postponed its collaboration with SpaceX until Nov. 1, which they also confirmed to Space.com. This indicates that Blue Origin and other difficulties with the corporation are one of the only roadblocks to the Artemis lunar mission progressing.

It was previously reported that NASA's Artemis space suits had a design issue consuming over half of the cash given to them. SpaceX has responded by offering to prolong its services and help make spacesuits.

The suits will require significant research since they will shield astronauts from potential injury on the Moon.

Apart from the problems that Blue Origin is bringing to the court, it faces a walkout and resignation of many of its employees, which comes after the New Shepard's recent successful trip into orbit. This comes after reports of staff "jumping ship" and leaving the firm, according to Gizmodo.

Many employees are staging a walkout on Blue Origin, but it has something to do with contract and full-time staff. This is the present challenge that Blue Origin must address, especially because it is limiting its staff to fulfill most of its goals, which are still in the works.

Blue Origin has lost several top engineers due to the departures, which is a significant loss for the space firm.

What's going on is that Blue Origin is dealing with a lot of controversy from external and internal sources. This demonstrates a great deal of friction between the company's management and personnel and the projects that they want to be pushed for the company's journey into space.

RELATED ARTICLE: NASA Lunar Landing "Not Feasible" Due to Delays in New Spacesuit that Will Be Ready in 2025 at the Earliest