SpaceX President Gwynne Shotwell warned earlier this week that liquid oxygen issues were making it even challenging to launch rockets and that anybody with extra should email her.

LOX is also needed in hospitals to treat COVID-19-infected patients and for water purification, and supplies are running limited. Space News said the city of Orlando requested people to reduce their water consumption on Friday so that more liquid oxygen might be diverted to hospitals. 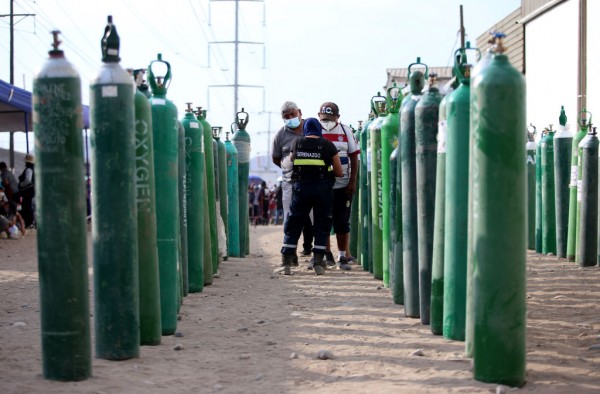 (Photo: Raul Sifuentes/Getty Images)
LIMA, PERU - FEBRUARY 27: Buyers sign up to fill their oxygen tanks on February 27, 2021, in Villa El Salvador, Lima, Peru. Medical Oxygen to treat COVID-19 patients is scarce, and Peru is now importing from Chile to satisfy demand. Relatives make lines overnight to have their cylinders refilled. Peruvian Health Minister has reported over 45,000 victims since the beginning of the pandemic.

In a video uploaded to YouTube by ExpovistaTV (which was later deleted), Shotwell stated at a Space Symposium panel that SpaceX's launches would be hampered this year due to a scarcity of liquid oxygen. Without going into detail, she said that SpaceX would ensure hospitals get the liquid oxygen they require.

"For anybody that has liquid oxygen to spare, would you send me an email?" she added.

Shotwell, who also serves as SpaceX's chief operations officer, reportedly stated that a worldwide microprocessor shortage had caused new workstations for the company's Starlink satellite internet project to be delayed.

The liquid oxygen scarcity is having an impact on other businesses. United Launch Alliance CEO Tory Bruno tweeted following the conference that the federal contractor that provides nitrogen for the company's launch facilities at Vandenberg Space Force Base in California is currently trying to alleviate the liquid oxygen shortfall in Florida.

The USG contractor that transports liquid GN2 to VAFB is helping with the COVID related LOX effort in Florida. Working that situation now. https://t.co/sTyprcRA42

This might impact preparations for the Landsat 9 satellite to launch from Vandenberg on an Atlas 5 rocket on Sept. 16. Bruno added they're dealing with the said situation right now.

How Rockets, Hospitals Use Liquid Oxygens

In the combustion chamber, the 'rocket fuel' is combined with an 'oxidizer,' which chemically reacts and produces new molecules, including a gas.

The massive volume of gas created, known as "exhaust," can only leave through a nozzle fitted into the rocket's rear.

The rocket is propelled higher by an equal and opposite force exerted by the exhaust blasting out.

Hospitals are preparing for a severe shortage that may cause a halt in Falcon 9 rocket launches, just as SpaceX is.

Hospitals are currently coping with an increase in COVID-19 cases, which puts a strain on their supply due to the Delta variant.

According to Stat News, the hospital has had to boost its liquid oxygen supply from 6,000 to 9,000 liters, but that will only last them two weeks.