Russian cosmonauts discovered many new cracks in the Zarya module of the International Space Station that could someday cause a disaster in space. Hence, many people want the ISS to retire soon.

This week, Vladimir Solovyov, head engineer at the Energia Rocket and space business, told the state-run news agency RIA Novosti that these "superficial fissures" might spread over time. Solovyov, in a PopSci report, did not further comment if the cracks could cause air leaks and other catastrophic events.

Still, this will not rule out the chance of having air leakage on the ISS due to the fractures. Space.com said Russian cosmonauts had to patch several breaches in a separate portion of the station (the Zvezda module) when they were discovered to leak air back in March.

Apart from that, in July, a software glitch pushed the ISS off track for a brief period, but the astronauts could repair it. Overall, these difficulties aboard the International Space Station caused people to wonder if it is the station's time to retire due to its old age.

Because the ISS's overall infrastructure hasn't aged gracefully, its components and subsystems are more prone to breakdown. Furthermore, maintaining it would be considerably more costly for NASA and other space organizations. Washington Post said NASA spends billions per year to keep ISS in space. 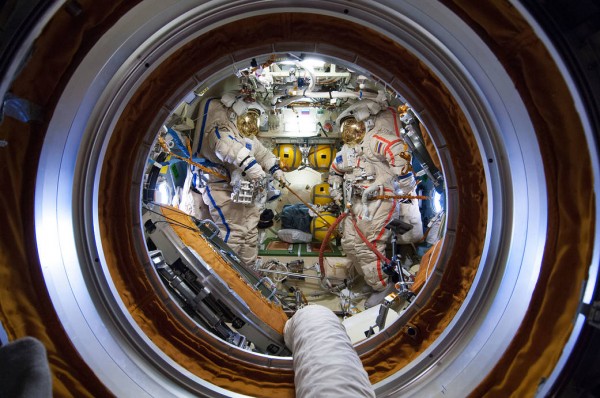 (Photo: NASA)
The Pirs Docking Compartment, also known as DC-1, is a Russian Module on the International Space Station. Pirs provides an airlock for cosmonaut spacewalks. It also serves as a docking port for transport and cargo vehicles to the Space Station. In addition, Pirs can transport fuel between the Zvezda or Zarya modules and docked vehicles such as a Soyuz or Progress spacecraft.

Reuters said Solovyov believes the ISS will face an "avalanche" of damaged and failed equipment beyond 2025 due to these accidents.

International Space Station's Retirement: Is There a Replacement?

It has stayed in low orbit above Earth since then, hosting various extraterrestrial experiments involving things like glow-in-the-dark baby squids and tardigrades, also known as "water bears."

The International Space Station (ISS) has been becoming older for some time, according to NASA. However, it appears that its successor may not even come from the US space agency. CNBC said NASA would have to rely on technologies produced by third-party firms.

Sierra Space in Colorado and Axiom Space in Houston are two of these firms aiming to build their own space stations. With NASA's recent connections with SpaceX and Blue Origin, both businesses may create their own colonies.

According to the agreements made amongst the ISS's list of international partners, the ISS's initial intentions were to stay operational until at least December 2024.

The station, which started aired in 1998, was scheduled to stay operational until at least 2024. Of course, PopSci said retiring the station would entail a lengthy process of dismantling and deorbiting components of the ISS to a deep-sea spaceship cemetery. According to The Washington Post, the Senate passed a NASA authorization bill at the end of 2020 to push out the retirement date to 2030.

Until then, further experiments will be carried out within the International Space Station until the station's last years, all of which have the potential to reveal the secrets of safe, long-term human-crewed space flights.