Russian cosmonauts are still working to repair a tiny air leak on the International Space Station discovered in 2020 after it was initially reported in 2019.

The seven-person crew is not in danger, according to NASA and Roscosmos, because the pressure reduction caused by the leak is much below emergency levels.

During the second half of 2020, astronauts and cosmonauts sought to pinpoint the source of the leak by closing hatches one by one across the outpost to check for pressure discrepancies. It was eventually found that it was coming from the Zvezda service module's rear compartment, 20 years old.

It's a short cylindrical tube that connects the rear docking port to the main "work compartment," and it's known as the "transfer chamber." The leak is caused by multiple microcracks in the chamber that is approximately the width of a human hair and as long as 22 millimeters. 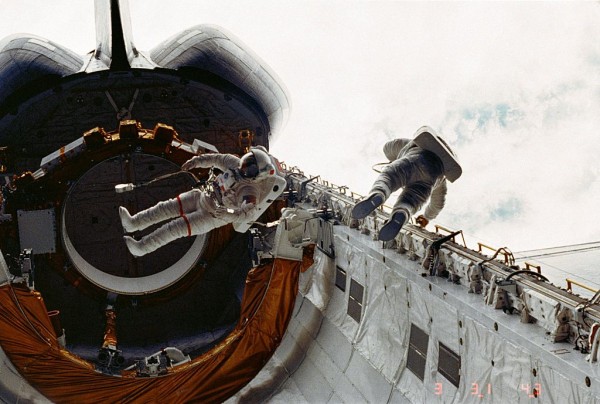 (Photo: NASA via Getty Images)
IN SPACE - APRIL 7: In this handout from National Aeronautics and Space Administration or NASA, Astronauts Story Musgrave (L) and Don Peterson float in the cargo bay of the space shuttle Challenger during the STS-6 mission on April 7, 1983, in space.

According to Russian state-owned news agency RIA Novosti, cosmonaut Pyotr Dubrov spent some time recently looking for new cracks in the Russian segment's transfer chamber but could not identify any using an airflow detector.

NASA did not react to inquiries on RIA's reporting right away.

Experts believe, per Sputnik News, that the cracks were caused by either metal fatigue or micrometeorites impacting the station's exterior.

While astronauts were forced to spend a weekend in the Russian part of the space station in August while all of the station's hatches were closed for air pressure monitoring, both NASA and Roscosmos claim that crew members were never in danger as a result of the leak.

Given the station's advanced age - personnel has been on board for more than 20 years - astronauts will almost certainly face new obstacles in the future.

Two cracks were discovered using an electron microscope last year. Russian media said Russian cosmonauts Sergey Ryzhikov and Sergey Kud-Sverchkov used a repair kit brought to the ISS aboard Progress MS-16 in February to permanently seal them in March. A three-millimeter drill, two types of sealing paste, and a sealing substance were used.

Before applying the paste and sealing material, NASA said the cosmonauts drilled holes on both ends of the fractures to prevent future expansion.

However, after the repairs were made, the pressure continued to drop (albeit at a slower rate), indicating that there were more cracks in the transfer chamber.

To detect the cause of more microcracks, the cosmonauts employed floating tea leaves (which were also used to find the initial two cracks). According to RIA Novosti, at least three more were discovered at the end of March and sealed on April 2.

A pressure check between the transfer chamber and the remainder of the outpost is expected to be the next step to see if the air leak persists.

The flaws are likely due to metal fatigue or load stress over time from visiting vehicles docking and undocking from the aft docking port, such as Progress and Soyuz spacecraft and the more-massive, now-retired European Space Agency Automated Transfer Vehicle, according to Russian space scientists.

The aft port is also where Progress spacecraft usually re-boost the station, putting additional strain on the structure.

In a statement on March 4, NASA noted that ISS has sufficient consumables to handle the scenario. Additionally, cargo spacecraft visiting the space station can deliver more air to the outpost.