A team of scientists from the University of Veterinary Medicine Vienna observed that wild cockatoos living on Indonesia's Tanimbar Islands use cutlery utensils like a knife and spoon made of tree branches to open their favorite fruits.

Daily Mail reported that remarkable Goffin's cockatoos are known for their inquisitiveness and sophisticated object manipulation. However, that was the first time researchers saw the wild cockatoos using tree branches as utensils to dig into the seeds of sea mango fruit. More so, it is the first time that researchers noticed a wild, non-primate animal engaged in toolmaking for a specific task. 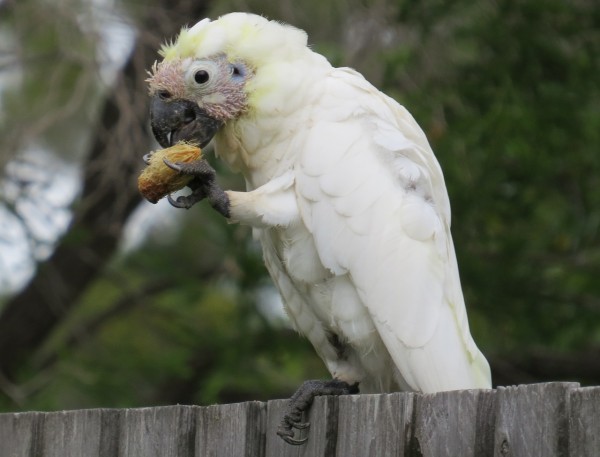 Study lead author Mark O'Hara and colleague Berenika Mioduszewska regularly study wild Goffin's cockatoos in Indonesia by occasionally capturing them and keeping them in an outdoor aviary to observe their behavior before releasing them back to the wild.

The researchers would offer sea mango fruit to 15 wild cockatoos, the only species in Indonesia to eat these fruits, as they are toxic for humans. Two older male birds immediately grabbed the sea mango fruit and flew over to a tree to strip off wood using their beaks. Researchers observed that the birds also cut off whole branches and mine the pulpy part of the wood.

Then they used their tongues and beaks to craft wood that they turn into usable tools with different sizes and thicknesses. They use their beaks to form cutlery utensils that resemble a knife and spoon.

"After I gave them the fruit, I looked back and was just blown away seeing a [bird] using tools on it," O'Hara told New Scientist.

The team collected the discarded tools from which they developed 3D models to understand better how the two wild cockatoos made the tools.

They said that the thinnest of the tools were sharp, resembling a knife, that birds use to pierce the coating of the fruit. Meanwhile, medium-sized tools resemble spoons that the birds use to dig into the pit and access the seeds.

The team also noted that wild cockatoos would sometimes use a third tool, a thick wedge used to pry the pit apart at its natural crack to shove the knives and spoons easily.

Out of the 15 wild cockatoos that they were studying, only the two male cockatoos displayed such behavior, while the rest of them nibbled the fruit and not the seeds without using any tool. The toolmaking behavior of the birds is not innate to them because only a few species can do it, such as primates and humans.

The team emphasized that the toolmaking behavior is a demanding set of actions compared to just using a single tool in accessing food.

This complex set of behaviors was only known in primates before, such as chimpanzees and capuchin monkeys. Mioduszewska remarked that it is practically impressive that wild Goffin's cockatoos can perform such masterful acts.

Techzle reported that the behavior is not based on instincts but on an individual bird's ability to understand complex relationships. They think that the wild cockatoos must have observed the behavior performed by other species.

Furthermore, their findings also shed light on the circumstances that might contribute to the evolution of intelligence in organisms. This opens new possibilities of what scientists could find in other animals that are related to cognitive research.

Check out more news and information on Birds in Science Times.