Scientists recently developed a game involving robots and humans wherein a gaze from robot eyes can impact the behavior of humans.

A ScienceAlert report said, when one knows somebody is watching him, it is difficult to pretend the one staring is not there. It can be hard to block them out and keep concentration, feeling the gaze bearing down upon him.

Oddly enough, it does not even appear to really matter whether they are alive or dead. Researchers set up an experiment in a new study where humans played a game, competing against a robot.

In this game, if the robot looked up at the human gamers during the session, it affected the behavior of its contender.

A tactic in the game, this said impact could be discerned in their neural activity's measurements recorded by electroencephalography or EEG while the experiment was being conducted. 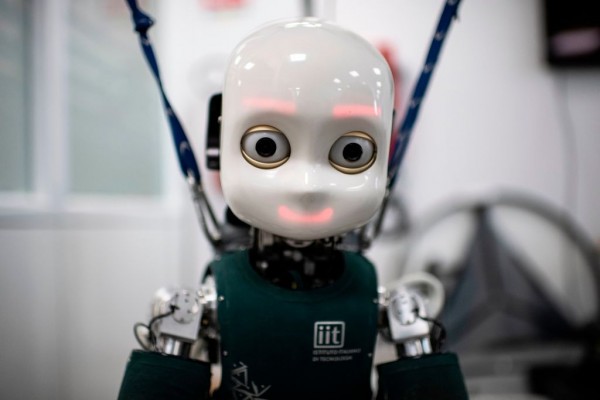 (Photo: MARCO BERTORELLO/AFP via Getty Images)
The iCub robot is developed at IIT as part of the EU project RobotCub and subsequently adopted by more than 20 laboratories worldwide.

According to Agnieszka Wykowska, a cognitive neuroscientist at the Italian Institute of Technology, if the robot gazes at an individual when he needs to decide on his next move, the latter will find it more difficult to decide.

The cognitive neuroscientist added that a person's brain would need to use "effortful and costly processes" to ignore the robot's gaze.

In the study, Mutual gaze with a robot affects human neural activity and delays decision-making processes, published in Science Robotics, 40 volunteers sat across from a humanoid robot called iCub, competing in a game of "Chicken" on a horizontal screen of the computer, in which a pair of simulated cars were rushing head-on towards one another.

Just before the moment of effect, the game would pause, and the study participants were asked to look up at their robot competitors, which would either look away or meet their gaze.

During this moment, the participants needed to decide whether to deviate to the side or let their cars run ahead.

The findings of the study showed that the return gaze of the robot did not affect the choices individual human players were making. However, it did cause their reaction time to minimally increase, with volunteers responding in general in the game when the iCub avoided its eyes.

Explaining their experiment's result, the researchers said in their paper, in line with their hypothesis, the delayed reactions within-subjects following a mutual gaze may propose that mutual gaze involved a higher cognitive initiative, for instance, by prompting more reasoning about the choices of iCub, or higher suppression degree or potentially distracting gaze stimulus, which was not relevant to the task.

The researchers said this change in behavior of players corresponded with a change in neural activity known as synchronized alpha activity, a brain wave pattern, as described in a previously published study, that was linked previously to suppressing attention.

Furthermore, when viewed through the whole experiment, higher exposure to avoided gaze where the robot did not gaze back among volunteers appeared to help players separate from the social interaction with the iCub, and concentrate on their gameplay with minimal distraction.

Provided that the iCub, as described by the Instituto Italiano Di Tecnologia, is a humanoid robot developed loosely to imitate both the shape and appearance of humans, it is not generally surprising that the gaze of the robot can stimulate humans' extraordinary attentional processes.

Related information about iCub humanoid is shown on iCub HumanoidRobot's YouTube video below: