Radioactive Injections: How Does This Method Help Against Slaughtering of Rhinoceroses, Poaching, Smuggling of Rhino Horns?

These animals are slaughtered for their horns; then, they are smuggled into Asia, where they are highly prized for medicinal and traditional uses.

According to University of the Witwatersrand nuclear researcher James Larkin, injecting a small amount of radioactive material into rhino horns might prevent poachers by "making smuggling easier to detect."

ALSO READ: LOOK: Alligator Popsicles in Oklahoma As Reptiles Stick Snouts Out of the Frozen Water 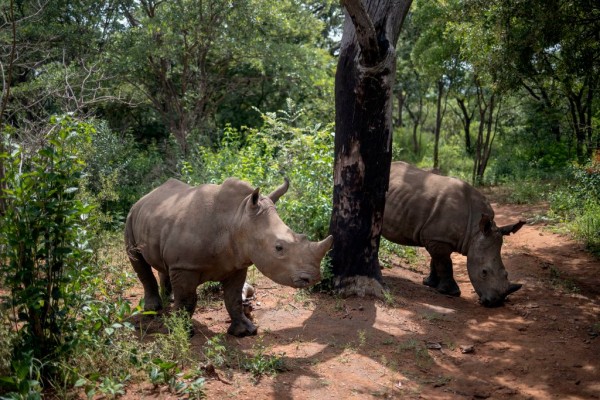 (Photo: MICHELE SPATARI/AFP via Getty Images)
Rhinoceroses are slaughtered for their horns; then, they are smuggled into Asia, where they are highly prized for both medicinal and traditional uses.

Over 11,000 radiation detectors have been installed at airports and ports worldwide, said the nuclear research in a webinar that the World Nuclear Association hosted.

Border agents frequently bring handheld radiation detectors that could identify the contraband, as well, he explained. Larkin added that the army of people capable of intercepting these horns could be radically increased to push back against the act of smuggling.

A pair of rhinos have already been injected with a non-radioactive isotope to ensure that the material will not travel and spread into their bodies or result in health issues for animals or humans.

Computer modeling will help the researchers identify what dose is suitable for the rhinos. Specifically, a model rhino head will be constructed with a 3D printer to test the doses before their trial moves to actual rhinos.

This initiative, called The Rhisotope Project, has support from the state-owned nuclear company Rosatom of Russia and scientists in the United States and Australia.

Early this year, ABC News reported South African customs officials had apprehended over $3.5 million worth of rhino horns at the O.R Tambo International in Johannesburg.

A shipment of the 18 pieces of horns weighing 139 pounds bound to Malaysia was detected in the courier facilities of the said airport.

As specified in the said report, the package had "HP cartridges," for the label, although an x-ray scan showed images similar to horns so the customs officials inspected it to detect the contrabands.

This was the fourth rhino horn bust by the customs officials in the airport since July 2020, with the weight of 611 pounds rhino horns, in all, which were worth over $15 million sequestered.

According to Edward Kieswetter, revenue service commissioner, those identified to destroy the rich natural endowment of the country, which is a universal treasure and heritage that should be looked after for future generations, will be met with a constant commitment to the officers to implement the law.

Earlier that week of the news release, the government announced that rhino poaching in South Africa had dropped by 33 percent last year because of the COVID-19 lockdown regulations limited movements across the nation.

A Republicworld.com report specified that the environment ministry said 394 rhinoceroses in all were poached for their horns last year, down from 594 slaughtered the other year.

Related information about radioactive materials injected into rhino horns is shown on RT's YouTube video below:

RELATED ARTICLE: Classic Tabby Cat Stripes: Where Does It Come From?