Astronomers estimate that flashes from an exploding star 10 billion light-years distant will be visible from Earth around 2037.

After appearing in three different pictures in 2016, this would be the fourth time light from the same star is observed. In the year 2019, the light went out.

A supernova, or exploding star, is a magnificent occurrence that glows so brightly that it outshines whole galaxies for a few days. When a star is near the completion of its life cycle, an explosion follows.

Three pictures of the dying star, named Supernova Requiem (placed in the MRG-M0138 galaxy), were caught by the Hubble Space Telescope as tiny dots.

A supernova “replay” is expected to appear in about 16 years, thanks to the magnification and splitting of light caused by the gravity from an enormous galaxy cluster that lies between us and the faraway supernova: https://t.co/a6CoKuUI2j pic.twitter.com/5KRMldZv1W

Supernovas Expected to Reappear in 2037

According to "A Gravitationally Lensed Supernova With an Observable Two-Decade Time Delay," a reappearance is anticipated in 2037.

Steve Rodney, the lead researcher at the University of South Carolina in Columbia, said in a statement what they saw is the most distant of the three. He added that the predicted return is extraordinarily long.

Supernovae are essential to study because exploding stars send elements and debris into space, according to scientists. Many of the elements present on Earth are created in the cores of stars, while others produce new stars or planets.

By calculating the time delays between the four supernova pictures, scientists may be able to learn more about the universe's expansion pace.

Researchers can also investigate the nature of dark energy, which defies gravity and accelerates the expansion of the cosmos. 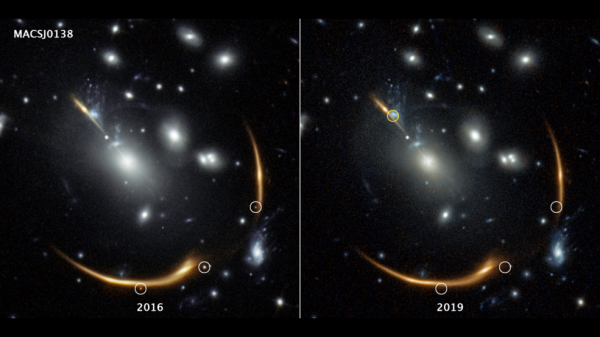 (Photo: Joseph DePasquale (STScI) via NASA)
Now you see them; now you don't. Three views of the same supernova appear in the 2016 image on the left, taken by the Hubble Space Telescope. But they're gone in the 2019 image. The distant supernova, named Requiem, is embedded in the giant galaxy cluster MACS J0138.

Astronomers Examining the Expansion Rate For So Long

For decades, astronomers have been researching the expansion rate, which will decide whether the cosmos is endless and without limits.

The dots appeared in 2016, NASA said. It varied in brightness and color, indicating that the explosion was fading as it cooled. Thanks to future telescopes, astronomers predict the return to be brighter and amplified.

These temporal delays, according to Rodney, are particularly significant because astronomers can acquire a good, exact measurement of them. That is, assuming astronomers are patient enough to wait years for the final image in this instance, more than a decade.

Scientific American said dark matter, which is thought to make up the bulk of all matter in the universe, is responsible for the vast majority of the universe's gravitational forces and plays a crucial part in its expansion.

Requiem's return is conceivable because of the tremendous gravity of its galaxy cluster, which bends and magnifies light from the supernova behind it - a phenomenon known as gravitational lensing.

This is analogous to the effect of a glass lens bending light to enlarge the picture of a distant object, which Albert Einstein predicted.

In 1987, a star 160,000 light-years distant near the Tarantula Nebula exploded. NASA said the star created the brightest supernova ever seen in Earth's sky.

It was so enormous that Supernova 1987A appeared as a brilliant star in the sky. The light could be seen with telescopes until 2017, even after it had dimmed.

RELATED ARTICLE: Did a Black Hole Cause a Rare, Premature Supernova? Scientists Explain How It Happened