A study of 300 sharks was recently conducted to quantify the resilience of specific species from industrialized fishing. The research attempts to understand how massive fishing lines affect sharks and how sharks respond to stress upon being caught or released. The key interest of the study is to know the limits of specific sharks before dying due to commercial fishing. 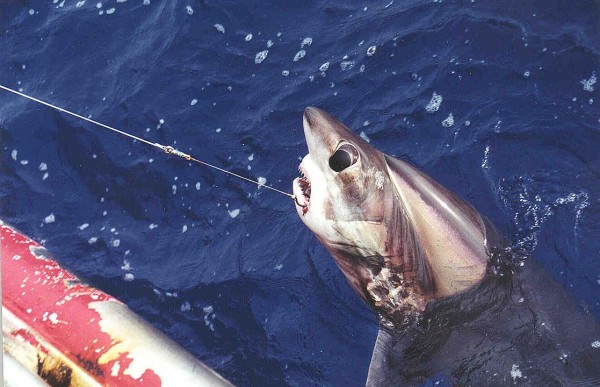 New England Aquarium led the study that has been investigated over the course of 5 years. Along with the institute, several collaborators participated in the research to gather information and publish one of the most comprehensive studies about the correlation between modern-day sharks and excessive commercial fishing. The experts utilized a usual approach that is proven to be effective in shark studies. According to a PhysOrg report, the scientists equipped a large group of sharks with specialized electronic-powered tags and extracted their blood samples for monitoring as each of them spread across various oceanic regions.

The Aquarium's Anderson Cabot Center for Ocean Life expert and lead author of the study Nicholas Whitney said that the tagging method is essential to analyze data from shark's experienced stress and predict how the animals encounter their fates in the vast water bodies.

Accelerometers were the device attached to the large shark population and were used for their sensor function in the research. The tracking medium was powered with the same technology that serves the same purpose as Fitbit devices. The study was made possible through the help of 300 sharks with distinct species such as tiger, spinner, blacktip, bull, and sandbar sharks.

The accelerometers were embedded in their fins that could read data based on their scale movements as well as their life regulation to determine whether they were still alive or not. The accelerometer device is also an advantage to track the total population of sharks before and after being caught by commercial fishing lines. The study's areas of interest are the Florida Keys and the Gulf of Mexico.

Fishermen, especially those that belong in the massive fishing enterprises, have a habit of keeping or killing sharks bycatch. But this routine is hurting the biodiversity of oceans, and the only solution to stop pushing specific shark species into extinction is to let them go once caught. But most of the fishing regulations have a loophole concerning sharks. PhysOrg reported that one regulation states that sharks must be released after being caught; however, they must only be released if the fishers conclude that they still have the capacity to survive. This 'no-take' regulation is indeed challenging for the experts to monitor.

Whitney said that the 'no-take' policy assumes that the sharks will gladly swim back to the ocean after being caught, but such fishing activities might actually impact some sharks. According to the study, there are cases where sharks die after being released due to injuries incurred or even stress. For example, the study analyzed that blacktip and spinner sharks have 42 to 71 percent of their population at risk of death after release. Unfortunately, only 3 percent of the group have a chance of surviving. The study was published in the journal PLOS One, titled "Connecting Post-Release Mortality to the Physiological Stress Response of Large Coastal Sharks in a Commercial Longline Fishery."