An amateur astronomer from Brazil has discovered an impact event on Jupiter and recorded it on film using his telescope. At least seven additional independent observations back up the detection. The impactor's magnitude is estimated to be about 100 meters.

Although much information is unavailable, ESA explained the hitting object that caused the flash is likely to be huge or fast or both. The amateur astronomer was acknowledged with the discovery in a Twitter post from the space agency's account on Tuesday, September 14.

Light on at Jupiter! Anyone home? This bright impact flash was spotted yesterday on the giant planet by astronomer José Luis Pereira.

Not a lot of info on the impacting object yet but its likely to be large and/or fast!

According to a report by Tweak Town, a Brazilian amateur astronomer named Jose Luis Pereira got the chance to check Jupiter's mystery body several times. 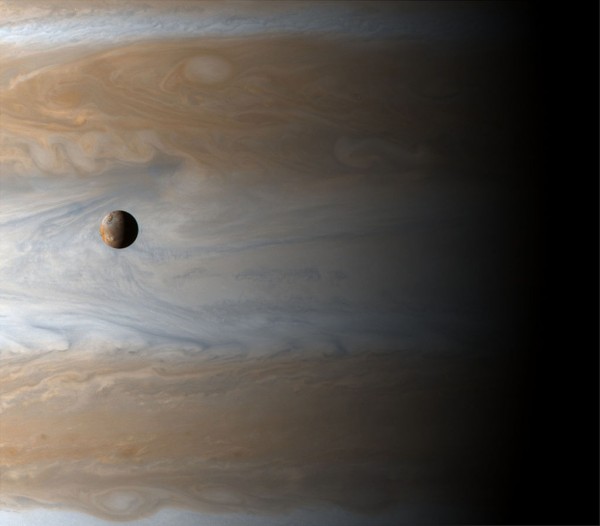 (Photo: NASA/Newsmakers)
388097 01: Gliding past the planet Jupiter, the Cassini spacecraft captures this awe-inspiring view of active Io, Jupiter's third-largest satellite, with the largest gas giant as a backdrop, offering a stunning demonstration of the ruling planet's relative size, April 20, 2001. The Cassini spacecraft itself was about 10 million kilometers from Jupiter when recording the image data.

On Monday, September 13, Pereira planned to use a basic Newtonian telescope to get the best images of Jupiter. He was getting ready to put up the astronomy equipment he was going to use at the moment.

The astronomer began writing his discoveries regarding the solar system's biggest planet at Caetano do Sul, So Paulo.

He was attempting to identify various impacts on the globe as part of the DeTect program. What he saw, on the other hand, was well worth the wait.

Pereira was able to collect 25 clips of Jupiter for the film.

The monitoring computer informed him that he had captured the first footage of a "strange" impact on Jupiter when he woke up the following day.

ALSO READ: Jupiter in Relatively Large, Bright Sight When It Positions Opposite the Sun; Watch As It Happens on August 20

In addition, the footage was later broadcast on the DeTect program. It was suggested that the footage captured might be about a rock collision in space.

After that, Pereira told the French Astronomical Society through Marc Delcroix. Delcroix then confirmed that there had been a real impact.

Was the Flash Just a "Small Rock" That Touched the Planet's Atmosphere? Astronomers Baffled

Pereira admitted in an interview with Space.com that he didn't pay much attention to the first video. He only thought of Jupiter's unique light as an adopted characteristic when he first noticed it.

Pereira continued to observe the impact but eventually decided to stop because of the oncoming terrible weather.

The Brazilian astronomer was soon informed the next day, September 14, that the recent observation he had seen might impact.

It was an emotional occasion for Pereria. He explained that he had been looking for a record of such an occurrence for many years.

Although Pereira noticed a distinct glow on the planet, it is still unclear if it is a space rock or another cosmic creature.

Some astronomers suggested that it may have been a Jupiter-struck meteorite.

According to astrophotographer Damian Peach, it's conceivable that merely a "small object" impacted the planet's atmosphere.