NASA's small brave helicopter team aims to test a speedy version of Ingenuity's rotors in unexplored terrain. According to the space agency's JPL, the helicopter completed a rotor spin test and is on its way to making its 14th flight.

However, the team warned that Ingenuity might be having a challenging time with flying this time because of the thinning Martian air and other factors.

Hvard Grip of NASA's Jet Propulsion Laboratory in Southern California, Ingenuity's main pilot, stated in a NASA report that Ingenuity is becoming more difficult to fly by the day. He's talking about the air density on Mars, which was previously relatively low and is now decreasing much more owing to seasonal changes.

After the Perseverance mission landed inside Mars' Jezero Crater in February, Ingenuity's flying campaign was planned to last only a few months, according to Grip. Ingenuity has greatly surpassed expectations and is still in the air, demonstrating how rotorcraft might be used as scouts for rovers or perhaps human missions.

However, Ingenuity wasn't built to withstand shifting seasons. Jezero Crater's air density used to be around 1.2 percent to 1.5 percent that of Earth. However, during the optimum afternoon hours for flight, when currents off the ground produce less instability for the low-flying drone, concentrations are reaching 1%. 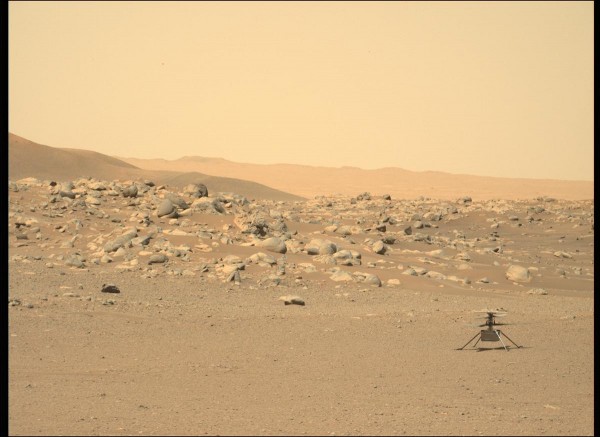 (Photo : NASA/JPL-Caltech/ASU)
NASA's Mars Perseverance rover acquired this image using its Left Mastcam-Z camera. Mastcam-Z is a pair of cameras located high on the rover's mast. This image was acquired on Jun. 15, 2021 (Sol 114) at the local mean solar time of 12:38:42.

ALSO READ: Is China Making Its Own Mars Helicopter? This Drone Looks Like NASA Ingenuity's Copycat

CNet, citing Grip, said increased rotor speeds of Ingenuity might cause problems. Although Grip claims this isn't likely a problem, the helicopter may encounter aerodynamic resistance that prevents the spacecraft from flying. The rotorcraft may also be subjected to vibrations, which might cause hardware damage.

Meanwhile, Space.com said engineers will also watch for possible resonances, which may cause the helicopter to shake at specific frequencies. These factors, according to Grip, might have a "hardware damage and degradation in sensor readings required by the flight control system. Other factors to consider are the need for greater power from the electrical system and the rotor system's increased load requirements.

Future Flights Of Ingenuity Might Put Helicopter Through Paces

Ingenuity has a way of getting around problems. It's survived technical difficulties and software updates, as well as progressively challenging flights. Let's hope it flies right through this new stumbling block.

The flight was intended to take place no sooner than September 17, but that was contingent on the mission team's readiness for the occasion. As new developments become available, Perserverance's official Twitter feed will be updated.