Shane Gero was one of the marine biologists whose work and insights helped shape the documentary "Secrets of the Whales," which recently won an Emmy Award for Outstanding Documentary or Nonfiction Series.

It was a late-night text that informed the Carleton University marine biologist and Scientist-in-Residence. A good part of the series' subject matter comes from his research on whale culture and social structures. Gero has been working with whales for more than a decade, particularly examining the marine mammals' habits and social behavior. 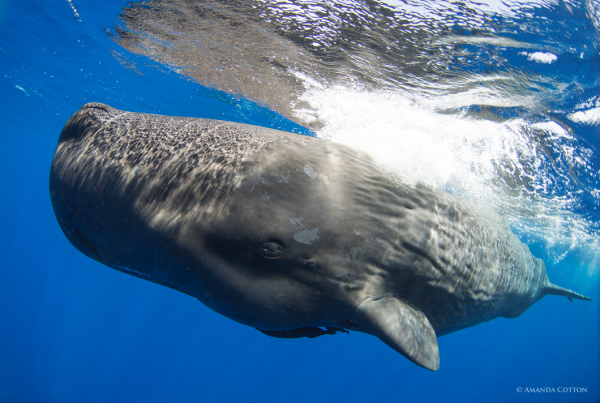 About four years ago, a photographer with the National Geographic wanted to document the Carleton University scientist's work with pods of sperm whales off the coast of Dominica in the eastern Caribbean Sea.

It was not only National Geographic who wanted to tell the broader story and Gero's groundbreaking work, Disney+ soon joined and his involvement in the project grew even larger. The "Secrets of the Whales" documentary series took three years to produce and involved filming different species in different locations around the world - and Gero worked on almost every aspect of the show.

Shane Gero: Understanding Whales, One Family at a Time

Shane Gero, who is also affiliated with the Universities of Aarhus and Dalhousie, also founded The Dominica Sperm Whale Project - a long-term behavioral study of sperm whales in the Eastern Caribbean that began in 2005. Combining a traditional observational approach with innovative technology, the project aims to address key issues in understanding these giant creatures. While they are focused on vocal communication and social behavior, their efforts also include biological sampling, passive acoustic monitoring, and photographic assessment of whale populations. Their data also help local governments make informed decision for the protection and conservation of these creatures.

He has also published multiple works over the years, tackling different aspects of social structure and habits from different whale species. In 2018, Gero and colleagues from Dalhousie University and Saint Mary's University examined the extent to which kinship affects the larger social organization. In the research article "Kinship influences sperm whale social organization within, but generally not among, social units," appearing in the Royal Society Open Science journal, they incorporated extensive association data of about 518 days and genetic data from 65 individual sperm whales across 12 different social units.

About Secrets of the Whales

Secrets of the Whales is a 2021 nature documentary television series that follow different whale species monitored from their respective habitats. Its show concept traces its origins back to 2008, after writing an article about endangered whale species for National Geographic.

The series currently has four episodes, each focused on a particular whale species and running for 45-50 minutes long. Secrets of the Whales recently won the 2021 Primetime Creative Arts Emmy Award for Outstanding Documentary or Nonfiction Series.

RELATED ARTICLE: Modern Day Jonas: Man Finds Himself Inside a Whale and Survived, Why is This Possible?