House Cats Cannot Roar Like Lions and Tigers, But Why? Study Reveals the Reason for Such Incapability

Most large cats like tigers and lions are able to roar loudly seemingly announcing their existence and protecting their territories. However, house cats are stuck in less ferocious rumblings and meows.

A California News Times report said domestic animals may have dominated the living room although an essential difference aside from the size is setting them apart from jungle king and that's vocalization.

Such incapability is linked to the physiology of the throat and larynx of a cat, helping to produce vocalizations in these animals.

According to a Pittsburgh-based Carnegie Museum of Natural History curator John Weibull, such sounds are commonly exclusive in cats due to the manner they're throating and roaring. 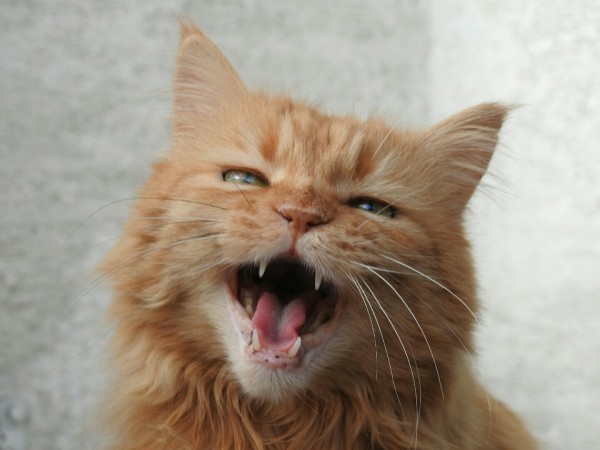 (Photo : Petra Ohmer on Pixabay)
Domestic animals may have dominated the living room although an essential difference aside from the size is setting them apart from jungle king and that’s vocalization.

The throat is a distinctive sound since it takes place both when the cat is inhaling and when it is inhaling. More so, vocalization appears to have first evolved in cats and is extensive in felines.

Throat cats would include domestic cats including Ocelot, Lynx, cougar, Cheetah, and Bobcat, among others.

Weibull said roars are much unusual among cats and have evolved in particular strains of large cats. He added these cats Panthera Genus which include Tigers, Lion, Leopard, and Jaguar among others. One exception is the snow leopard. It may have lost the capability of roaring.

Originally published in Live Science, the report indicated that like humans, the sounds house cats can produce can be heard through a voice box called the larynx.

Such a difference between a roaring cat and a cat roaring starts here, although it is unclear exactly how cats are making sounds, explained Wible.

The roar is coming from the throat's winding bones. Specifically, the larynx of the mammal is in the throat, as well as the air that passes through its structure is making a sound.

In addition, the hyoid bone and vocal cords are two essential parts of the larynx that produce the vocalizations of the sound.

Wible explained all mammals have bones close to the mandible, which is the hyoid device, in the neck, and these bones link directly to the skull's base, either through ligaments or directly.

Essentially, epihyoids, instead of bones, are described as extended elastic ligaments. Flexible cartilage enables animals to lower the voice box and produce deeper sounds. Rumbling, on the other hand, is coming from a variation of the larynx.

One more essential variance between roaring and throating cats lies in the voice box itself, which is vital for throating. Wible elaborated, the throat that rings are caused by a very quick spasm of the vocal cord muscles in the larynx's vocal cords.

Roaring cats are characterized by longer, heavier, thicker, most elastic, and thicker tissue layers that make up the vocal cords.

A study published in PLOS ONE specified that the organization is robust, not to mention flexible, enabling the said large cats to produce a low-pitched roaring roar.

Whatever physiological development resulted in the throat of a cat, it must have provided some evolutionary advantages to be kept in the lineage of the cat, explained Weibull.

Related information about cat vocalizations is shown on Jackson Galaxy's YouTube video below:

Check out more news and information on Cats on Science Times.