Jared Isaacman of SpaceX Inspiration4 released a shot and some videos taken more than 300 miles above Earth. These fantastic photographs he captured using his iPhone on Twitter.

While the team had more spectacular, specialized camera technology on hand, Isaacman spent time in orbit as part of the SpaceX mission. It was left to an iPhone to record stunning images. Even a xenomorph got in on the action.

Cool video from 🐉 cupola w/ xenomorph. In hindsight, it wasn’t worth the trouble of repacking the alien and probably took away from the video… but the view is pretty incredible and my kids will like the 👽
Shot from: iPhone. pic.twitter.com/OB0KTIlv0y

It's worth mentioning that the all-civilian team collected data for the health research using Apple devices: including the iPad, iPhone, and even the Apple Watch.

According to NDTV, Apple's iPhone received new attention after the Inspiration4 crew commander revealed their spectacular view from orbit on his Twitter account. He even praised the Apple product in his tweet.

Amazing that an iPhone can take a shot like this. I really love the nosecone in the picture. pic.twitter.com/sz1UVx3pUE

"Amazing that an iPhone can take a shot like this," Isaacman, who is also the CEO of Shift4 Payments, said in his post. He added that he "loves the nosecone in the picture."

He took the breathtaking view of the Earth from the enormous glass dome feature of SpaceX's Dragon spaceship known as the "cupola." 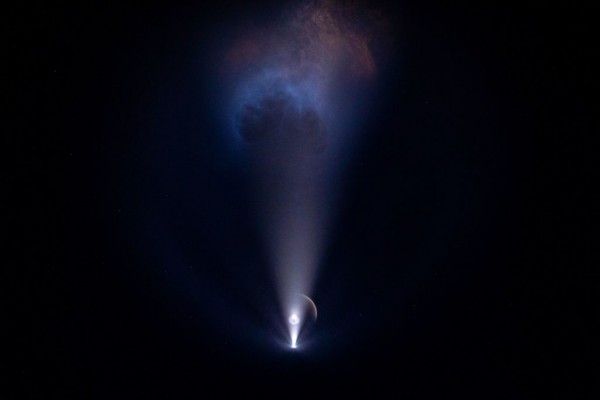 (Photo: CHANDAN KHANNA/AFP via Getty Images)
The SpaceX Falcon 9 rocket is carrying the Inspiration4 crew launches from Pad 39A at NASA's Kennedy Space Center in Cape Canaveral, Florida, on September 15, 2021. - The Inspiration4 mission, the first to send an all-civilian crew to orbit, will venture deeper into space than the International Space Station.

ALSO READ: SpaceX Gives Astronaut Wings to Its Inspiration4 Crew; Can You Guess What FAA Said?

It's worth mentioning that Isaacman isn't the only member of the all-civilian team that spent time photographing and filming the breathtaking vistas from orbit.

One of the Inspiration4 crews, Arceneaux, also uploaded a 360-degree image of the Earth during their trip, calling it "absolutely life-changing," according to News18.

As remarkable as Isaacman's tweets are, perhaps people should be more amazed by what they show rather than astonished by the quality of the job. He sent out another tweet, this time depicting calm Earth hundreds of miles below.

A video over Brazil from first day on orbit. Shot w/iPhone but hopefully we can get some of ⁦@inspiration4x⁩ Nikon shots out soon. Such a privilege to see our 🌎 from this perspective. We need to take far better care of our home planet and also reaching for the stars. pic.twitter.com/mAQw6eK8Ui

The millionaire and mission commander went on to say that he shot the amazing footage on his iPhone. He did say, though, that photos shot with his Nikon camera will be released soon.

The all-civilian Inspiration4 crew, including Isaacman, Arceneaux, Chris Sembroski, and Sian Proctor, flew into orbit for their historic voyage and returned to Earth three days later.

Elon Musk, the CEO and founder of SpaceX, completed the fundraiser by contributing the remaining $50 million to the charity.