A shocking recent discovery by a team of zoologists identifies the third tardigrade fossil ever to be discovered. The fossilized remains of the water hog are, according to researchers, an entirely new species and genus that hasn't been seen before. 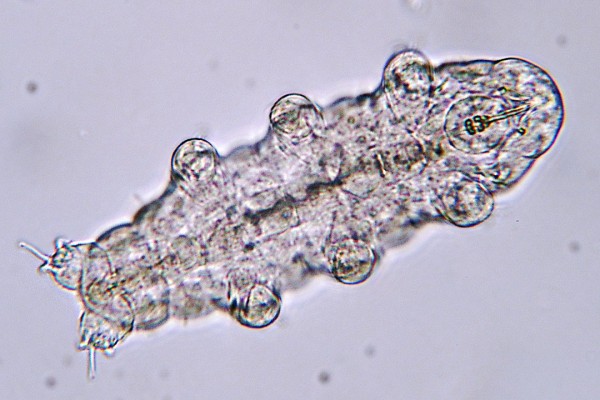 Tardigrada or tardigrades, according to National Geographic, are microscopic eight-legged omnivores that have survived in space and are believed to be able to survive an apocalypse. There are roughly 1,300 tardigrade species around the globe.

These microscopic animals are considered to be aquatic due to a thin layer of water surrounding their bodies a necessary to prevent dehydration and survive. On the other hand, these bears of the moss have been observed in various environments, from the darkest depths of the sea to the driest sand dunes.

Despite the tardigrades' squishy appearance, they are, n fact, covered in a tough cuticle that is similar to the exoskeletons of insects such praying manties and grasshoppers, to which the moss piglet is related to.

When alive, the tardigrades are virtually indestructible and extremely resilient, however, despite this, they are rarely seen in fossil records. Its extremely microscopic size and lack of hard tissue equate to the mear impossibility of fossilization. And when tardigrades luckily fossilize they are very difficult to spot.

In a study published in the journal Proceedings of the Royal Society B, titled "A tardigrade in Dominican amber" researchers documented their findings on the P. chronocaribbeus.

Finding the new species of tardigrades was a chance discovery. Researchers initially collected the amber fossils with the goal of finding insects such as termites and ants. Marc Mapalo, author, and organismic biologist at Harvard University tells Live Science that the team has had the amber samples for months, but were only looking for insects. It wasn't until a lab member spotted a small body lodged alongside some ants, a beetle, and a flower that the team turned their focus away from the insects.

The chance discovery of the P. chronocaribbeus was remarkably preserved, the chitin in the tardigrade's body was completely intact which meant that the team of scientists could use microcopy to have a glimpse of the creature's body, something that hasn't been done in tardigrade fossils before. Additionally, aside from the exterior and claws of the tardigrades which was the only thing visible in the past tardigrade fossils, the team was also able to observe the water hog's foregut that ended up being vital information to peg the specimen as an entirely new tardigrade species and genus.

Phil Barden, senior author and an assistant professor of biology at the New Jersey Institute of Technology says that the remarkability of the tardigrades stems from its ubiquitous ancient lineage that has been observed all on Earth, from the fall of the prehistoric dinosaurs to the rise of terrestrial plant colonizers reports Popular Science.