UNICEF Joins DRC Authorities in Combating Ebola Virus; New Case Reported Since Declaration of End of Epidemic in May

The UN Nations Children's Fund or UNICEF earlier today announced that it is currently in partnership and working with the Democratic Republic of the Congo authorities following a report of an occurrence of a new case of Ebola virus in the northern part of the country.

According to the LatestLY report, the DRC government verified late yesterday the death on October 6, of a three-year-old child due to Ebola in Beni, in the northeastern North Kivu province, one of the epicenters of the last outbreak of Ebola that ended in early May 2021.

In the said statement, it was specified that staff at UNICEF are already on the ground in response to this most recent reappearance of Ebola.

It also indicated that additional staff would be coming to Beni over the weekend to support the first-line response through "community mobilization, infection control, and decontamination" initiatives. 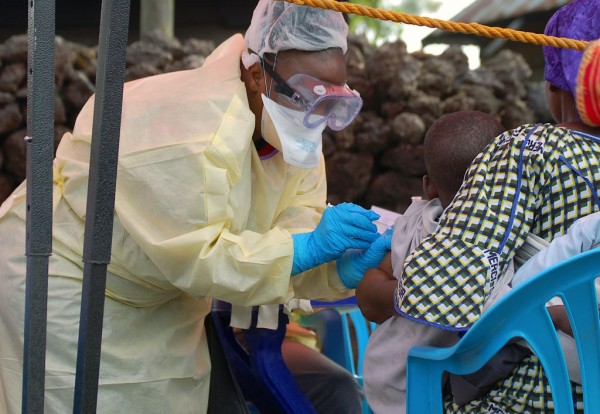 (Photo: AUGUSTIN WAMENYA/AFP via Getty Images)
A child received a vaccine against Ebola from a nurse in Goma in 2019. Three cases of the deadly virus were detected that year in the border city of Goma, the Congolese presidency said.

Case Anew 5 Months After Declaration of End of the Epidemic

Report from AFP News via Yahoo! News said five months after the latest epidemic of Ebola in the Democratic Republic of the Congo was declared to have ended, one Ebola case has been recorded and reported in the country.

A specimen was taken from the child who died from the virus, was sent to the provincial capital Goma, and was positive.

The ministry said teams have been working on the ground to trace and observe approximately 100 contacts. They are also decontaminating facilities as part of the first-line response and control measures.

As indicated in the statement, DRC officials said the experience gained in managing the virus during the past epidemics has given them confidence that the response teams will be able to manage control of this epidemic "as soon as possible."

In May, the DRC announced its 12th Ebola outbreak in which 12 cases were reported, including six deaths and hundreds of people receiving their vaccines.

The virus had recurred earlier on in February in an area of North Kivu that experienced the largest Ebola outbreak between August 2018 and June 2020 in the history of the DRC, with more than 3,400 infections and over 2,200 deaths.

UNICEF is set to ship medical equipment, sanitation, water, and infection control supplies to areas affected by the virus.

Three trucks loaded with essential equipment are departing on Sunday. The said report specified that it will carry "160 cubic meters of vital WASH," and nutrition supplies.

Health authorities in DRC confirmed that the child died in a Butsili Health Area health center that's not far from Beni, where he was admitted with symptoms similar to Ebola early this month.

A test conducted by GeneXpert in Goma confirmed that the boy had Ebola. In connection to this, the cases and deaths reported earlier this year lasted almost three months, specifically in Biena, Katwa, Musienene, and Butembo Health Zones of North Kiku province.

Report about the boy's death from Ebola is shown on eNCA's YouTube video below: