Engineers launched four CubeSats as rideshare payloads atop a United Launch Alliance Atlas 5 rocket as part of the Landsat 9 mission. After lifting off from Vandenberg Space Force Base in California, Atlas 5 successfully delivered the Landsat 9 satellite, a joint NASA-USGS mission, into a 420-mile-high (675-kilometer) polar orbit, according to SpaceFlight Now.

NASA moved the Centaur upper stage of Atlas 5 at a lower altitude to release four CubeSats that they carried within dispensers on a secondary payload adapter.

Technopedia said a communications satellite is an artificial satellite sent into the Earth's orbit to transmit and receive data between a source and a destination. It is used for data transfer and relaying for televisions, radios, telecommunications, weather, and Internet services. 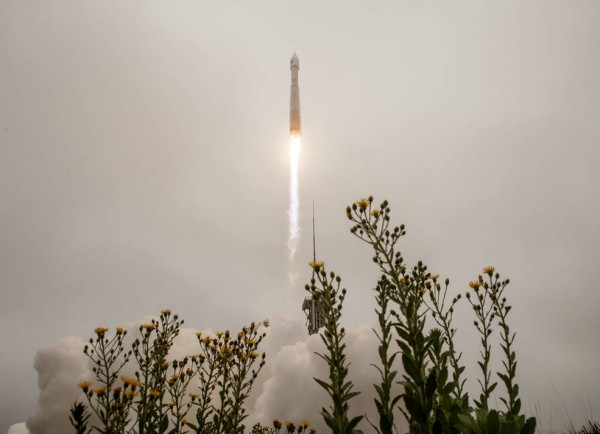 (Photo : NASA/Bill Ingalls)
The United Launch Alliance (ULA) Atlas V rocket with the Landsat 9 satellite onboard launches, Monday, Sept. 27, 2021, from Space Launch Complex 3 at Vandenberg Space Force Base in California. The Landsat 9 satellite is a joint NASA/U.S. Geological Survey mission that will continue the legacy of monitoring Earth’s land and coastal regions.

According to the United Launch Alliance (ULA), they released the tiny secondary payloads from the transport modules in the Centaur scenario, two for NASA and two for the US Army's Defense Innovation Unit.

CuPID, one of the CubeSats, was constructed to investigate the dynamics that affect space weather by studying the interplay between solar activity and the Earth's magnetic field. CuPID, or Cusp plasma imaging detector, contains equipment that monitors the X-rays generated when solar wind plasma collides with neutral atoms in Earth's atmosphere.

NASA spokeswoman Denise Hill said in a SpaceFlightNow report that ground personnel was still trying to reach CuPID. According to Hill, such efforts are taking longer than planned, but officials aren't giving up. They're still trying to get signals from the CubeSat.

CuPID was created by Boston University students and academics using a 6U CubeSat platform. Team members ignored multiple requests for updates on the tiny satellite.

The spacecraft, roughly the size of a toaster oven, is home to the world's first wide-field-of-view soft X-ray camera. CuPID data was intended to supplement studies from larger NASA projects like the Multiscale Magnetospheric Mission by studying how Earth's magnetosphere responds to solar inputs.

Ready.gov said space weather is caused by interactions between solar activity and the Earth's magnetosphere, which can impair communications, power grids, and satellite operations.

The image sensor onboard Landsat 9 will record visible and other sections of the spectrum. It also contains a thermal sensor that measures the temperature of the surface.

According to NASA, the Landsat program has the oldest continuous record of Earth observation from orbit, capturing changes in the planet's terrain ranging from the rise of cities to the movements of glaciers.

Interior Secretary Deb Haaland, who attended the launch at Vandenberg, said the Landsat program provides "a rich kind of data" that aids people's daily lives and is critical in combating climate change.

During a NASA TV interview (via Los Angeles Daily News), Haaland stated that the world is currently in the midst of a climate catastrophe.

He claims that pictures like the ones Landsat 9 will return will be quite useful in guiding us in our understanding of how the earth is dealing with climate change. They are working to ensure that we can make the best judgments possible in order to ensure that people will have access to water in the future.

Musk said Landsat 9 could capture and comprehend the changes that have happened in the terrestrial environment during this time span as a result of both human and natural occurrences.

The data may be used in a variety of ways to understand better and manage Earth's resources.

Landsat is the greatest tool for determining tropical deforestation rates and other forest dynamics such as disturbances. Musck went on to say that Landsat is also important for monitoring agricultural and food safety.