Breast cancer prediction tools are used to identify at-risk women for early detection and targeted interventions. But the lack of such models specifically made for Black women represents a critical gap, especially because they are more likely to have breast cancer at earlier ages and worse prognosis compared to White women.

But recently, researchers from Boston University's Slone Epidemiology Center developed and evaluated a new breast cancer prediction tool that is tailored for Balck women to be used in primary care settings. 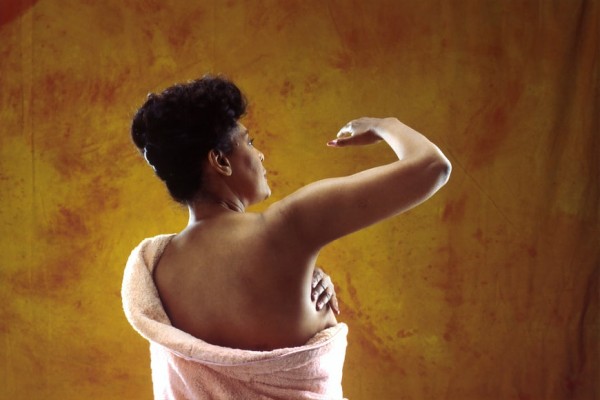 (Photo : Unsplash)
Breast Self-Exam. A rear view of an African American woman performing a breast self-examination (BSE) and is dressed in a towel framed against a brown-gold background. (National Cancer Institute)

Moreover, they also develop the deadly disease at a younger age, in which some are diagnosed under 50 years old and often have the more aggressive form called triple-negative breast cancer. This type of cancer is immune to many targeted treatments that block tumor growth and tends to spread more quickly than other types.

Black women are three times more likely to have triple-negative breast cancer. Some studies have also shown that this type of cancer accounts for 20% to 30% of breast cancers diagnosed among Black women.

There is no simple answer to why there is a disparity of breast cancer in Black women. But it is most likely because of both socioeconomic and genetic factors.

Genetics plays a vital role in the higher rate of more aggressive cancers. Meanwhile, socioeconomic factors may contribute to the staggering mortality among Black women with breast cancer due to inadequate screening, and lack of access to treatments.

In a news release by the university, the corresponding author of the study Julie Palmer said that improvement in early detection of breast cancer in Black women is critical because they have a disproportionately high rate of breast cancer mortality.

Palmer and colleagues built a new risk prediction model based on the epidemiological data from three case-control studies of Black women from different parts of the United States. Then, they tested the new tool using 15 years of follow-up data from nearly 52,000 participants in the Boston University Black Women's Health Study.

The researchers said that the breast cancer risk prediction tool is simple to use and the information required can be obtained from the women by asking simple questions. Palmer noted that this tool specifically made for Black women can be easily used by primary care providers to guide screening recommendations for early diagnosis and reduced mortality.

They published their findings of the study, titled "A Validated Risk Prediction Model for Breast Cancer in US Black Women," in the Journal of Clinical Oncology.

Despite the reduction in mammograms during the pandemic, the breast cancer diagnosis in 2020 and 2021 remained the same as from previous years, Cyprus Mail reported. Survival rates in Cyprus are one of the highest among European countries as patients have access to new and innovative treatments, as supported by data from the World Health Organization (WHO).

As reported in OECD iLibrary, the five-year net survival for women with breast cancer in Europe improved in recent years, reflecting the increased screening and improved quality of cancer care. The cumulative probability of survival of breast cancer patients has an average of 96% in European countries, but survival rates for the advanced stage are only 38%.

RELATED ARTICLE: Why Is Cancer Care So Expensive? Treatment for the Deadly Disease Costs the US More Than $156 Billion Annually