Border collie Dave, a blind dog, has everyone fooled that he can see despite having underdeveloped retinas. Even his owner, 69-year-old Jane Downes, only realized that Dave is blind nine months after the dog came to live with them.

In a story shared by the Good News Network, a top veterinarian in the United Kingdom has declared Dava a "medical mystery" after completing obstacle courses at a level that no blind dog has ever achieved. 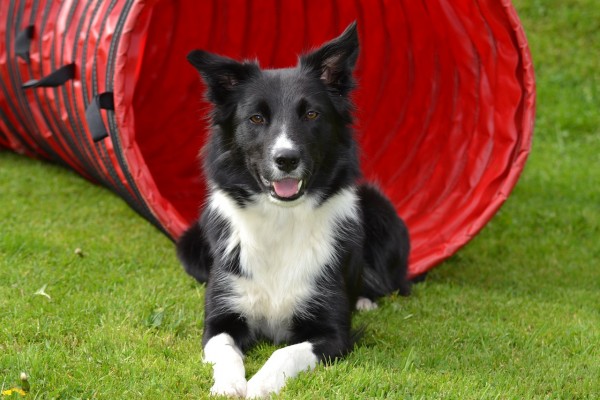 Jane said that they did not notice Dave is a blind dog since birth because he would always come when he is called and would happily play with other dogs. More so, Dave "never puts a foot wrong" and can even navigate well in their house and around puddles despite his underdeveloped retinas that caused his complete blindness.

Dave is believed to be five or seven years old and had been with Jane and her family for almost a year when she made the discovery. Jane narrated that he bought the blind dog from an animal rescue center in February 2020, and at that time, no issues were raised regarding his sight and event after a check-up.

"He jumped into the back of the car and I brought him home," the news outlet quoted Jane. "On a couple of occasions he walked into things but I put that down to him being a sheepdog who more than likely lived in a barn rather than a house."

But when he brought him to a pet shop in Cambridge, Dave stumbled over a step and the pet shop owner told Jane that Dave might be blind. Jane then took him to a veterinarian and it turns out Dave had been blind since birth.

Williams told a local newspaper that Dave's skills in obstacle courses are something that he has not observed in other blind dogs that bump into objects in a way that Dave did not. He called Dave a medical mystery, something that he could not explain. Dave now lives happily with his new brother, a two-year-old border collie named Sammy.

ALSO READ: Dogs Have Memories As Good as Young Children and Remember Tasks Done Within the Last Hour: Study

Puppy's eyes are not fully developed when they are born and it is not until they reach four weeks old that they can be examined. According to an article in Wag!, congenital eye defects in dogs are those defects that develop during the gestational period and may be seen clearly at birth or may not be apparent until the puppy is older.

Causes can be due to other congenital eye disorders, or there may be defects within the pathway of tears and fluid drain, retinal problems that developed during the gestational period, skeletal abnormalities, cell abnormalities, underdeveloped eye parts, defective optic nerve, viral infections in utero, and DNA mutations.

Treatment could include surgery, especially for those diagnosed with glaucoma, cataracts, and primary lens luxation. Some veterinarians might also prescribe topical medications. Unfortunately, there is no cure for collie eye anomaly and generalized progressive retinal atrophy.

Modern Dog magazine shared some tips from experts on how to help vision-challenged dogs lead a normal life. Experts suggest blind dog-proofing the house to fence off possible hazards, like pools and stairs. Also, do not rearrange your furniture as they create a map in their heads to navigate your house. Try to train your dog as well to move in obstacles and play games with them to entertain and engage them in their surroundings.

Check out more news and information on Dogs in Science Times.