In connection to this, the National Oceanic and Atmospheric Administration (NOAA) have issued a Geomagnetic Storm Watch for today, for the northern hemisphere.

A Fox News report said the large flare that was detected over the weekend was observed on the right side of the sun directly facing Earth. It also comes as the period of increased solar activity begins.

As indicated in watch NOAA issued, it is a "G2" occurrence. G5 is the worst and "G1" is the mildest. 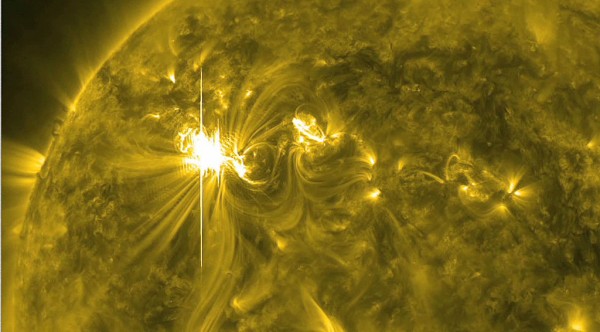 A Sky News report specified that the said geomagnetic storm could cause "power grid fluctuations with voltage alarms at higher latitudes. For satellites, it could result in orientation irregularities, as well as an increased drag in the low orbit of Earth.

This report also indicated that people from New York to Wisconsin to Washington might observe Aurora in the sky.

Moderate effects of the geomagnetic storm are expected today. Minor impacts, on the other hand, could last until Tuesday.

As per the Carrington Event, thought to be the largest storm ever recorded hitting this planet in the late 1850s, astronomers are not expecting the flare to result in significant disruption.

The Carrington, described in the Gaia site, left visible, an aurora across the sky, even in latitudes much nearer the equator, and was explained in current reports as even brighter compared to the full moon's light.

As specified in this report, there's a number of classes of solar flares, with X-class being regarded as the strongest. The CME occurrence on Saturday was considered an M-class event, the second most intense behind X.

This is identified as a "Halo CME," as flares that had directly for Earth can be observed as a halo surrounding the sun.

The United States Administration is now watching for the impacts of this flare with NOAA tracking such a detection.

According to the Met Office, Aurora is likely through today across a great part of Scotland, even though cloud amounts are rising which means, sightings are improbable.

It also said there is a small chance of aurora reaching far north of England and Northern Ireland Monday night, although it could break, and thus, sightings are possible in Northern Ireland.

The said occurrence resulted in the telegraph systems throughout Europe and North America, and a similar storm today could lead to trillions of dollars in damage worldwide.

Solar activity has been observed increasing and naturally dropping every 11 years. However, it is not quite like clockwork, and astronomers believe, as earlier mentioned, the Earth has now entered the "early years of a new bust period."

In connection to the occurrence, a family of sunspots detected on this planet's star's surface in 2020 unleashed the hugest solar flare that scientists have ever since 2017.

Report about the large solar flare is shown on DAHBOO77's YouTube video below:

RELATED ARTICLE: Solar System Estimated to Be Much Younger at 4.55 Billion Years Based on Magnetism Analysis

Check out more news and information on Solar Flare on Science Times.