The James Webb Space Telescope, NASA's next-generation space observatory, has landed in French Guiana, South America, after more than two decades of delays and rising construction costs. NASA will launch the spacecraft later this year. Its arrival kicks off weeks of final preparations before the telescope is placed onto the rocket and sent into space.

Space.com said a ship carried the $10 billion telescope from Seal Beach in Orange Country, California on September 16. The ship arrived at the Panama Canal on October 5.

The James Webb Space Telescope, or JWST, spent 16 days at sea aboard a French cargo ship, stowed within an environmentally controlled, custom-built shipping container. According to CNET, engineers packed the telescope in a giant suitcase. After filling in the large luggage, they sent the package from Redondo Beach, California. There is where the telescope's primary contractor, Northrup Grumman is located. JWST had been undergoing final assembly and testing at Northrop since early 2018. 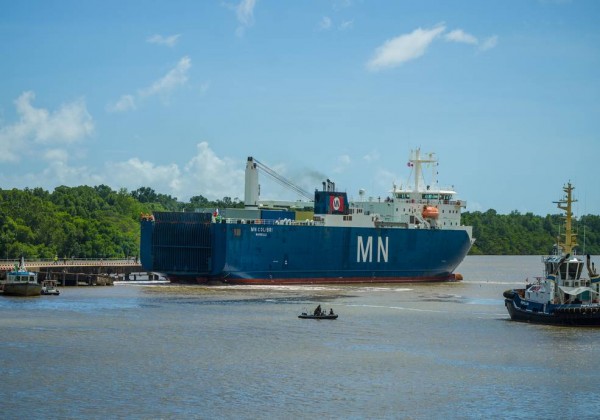 (Photo : NASA/Chris Gunn)
After the custom-built shipping container carrying Webb is unloaded from the MN Colibri, Webb will be transported to its launch site, Europe’s Spaceport in Kourou, French Guiana.

Now that JWST has arrived in French Guiana, a South American country, the mission is almost launching. NASA has been changing the target launch for some time. The Verge said JWST was first suggested in 1996 and intended to debut in 2007 at $1 billion. However, the project's schedule has been repeatedly pushed back as the mission's budget has risen to almost $10 billion. NASA established a target launch date of December 18. That is more than 10 years later than initially intended.

Many of the delays were caused by issues that emerged during the spacecraft's testing. JWST has completed a battery of tests, such as vibrational and cryogenic testing, to guarantee that it can endure the force of launch as well as the harsh environment of space. Some screws came loose during testing and assembly at Northrop Grumman, valves leaked, and engineers discovered rips in the spacecraft's tiny sunshield, which is critical for keeping JWST cool when in direct sunlight.

JWST testing was completed in August of this year, and Northrop Grumman spent the following month meticulously folding the telescope into the proper shape for shipment to French Guiana. NASA intentionally withheld the precise date JWST left Redondo Beach at the time, fearing that pirates might intercept the spacecraft's transport vessel. Police escorted JWST to its freight container on a 26-mile drive via Los Angeles to Naval Weapons Station Seal Beach, where it was put onto its ride to Kourou, French Guiana, late in the night on September 24.

There's still a lot of work to be done before JWST takes to the skies, but when it does, it'll change astronomy by allowing scientists to gaze deeper into the universe than ever before. The telescope, which NASA will send into orbit on a European Ariane 5 rocket, is expected to reach a distance of one million miles from Earth. JWST will be able to capture light from the Universe's earliest objects, some of which originated shortly after the Big Bang, thanks to a giant gold-plated mirror measuring 25 feet in diameter.

According to the BBC, the James Webb observatory will also undertake final testing with its rocket as it prepares for launch in December. Following its launch, the telescope will travel to the Earth-sun Lagrange Point 2, where it will use infrared light to see into the universe. The $10 billion telescope will replace the Hubble Space Telescope.

Researchers and scientists will be able to see and analyze galaxies and stars, as well as any evidence of life on Earth's nearby planets, thanks to the James Webb observatory. In a statement, NASA Administrator Bill Nelson claimed that humanity is "near to understanding cosmic secrets."