In December, NASA will launch the James Webb Space Telescope to investigate worlds beyond our solar system. Is the Nancy Grace Roman Space Telescope, launched in mid-2020, a better telescope than JWST?

Of all, finding life beyond Earth is difficult, and this telescope won't provide definitive proof that aliens exist. However, some experts believe that this telescope may detect signs of life on Earth-sized planets that have so far eluded careful examination.

The Roman Space Telescope, which has a panoramic field of at least a hundred times bigger than Hubble's, can collect space photos and data in a single exposure. In contrast, other telescopes require many individual exposures patched together into a mosaic. 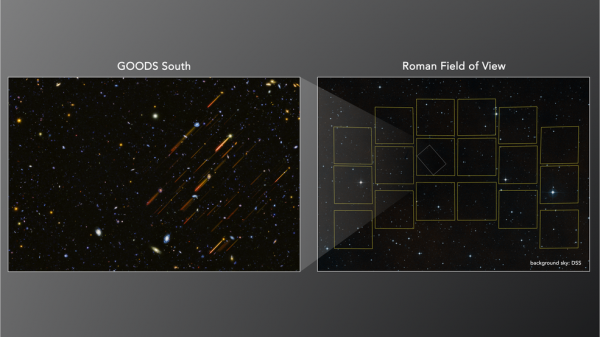 (Photo: NASA, ESA, and J. DePasquale (STScI) Acknowledgement: DSS)
The Hubble image of a portion of the GOODS-South field (left) required multiple individual exposures stitched into a mosaic. The Roman Space Telescope will have a field of view (right) at least 100 times greater than Hubble, allowing it to capture data on thousands of galaxies in a single exposure.

Aside from the panoramic field vision, the Roman telescope generates clear images thanks to its high resolution while sweeping the sky at a thousand times the speed. According to NASA, these major characteristics can help astronauts comprehend galaxies better.

For galaxy study, Roman's spectroscopic capabilities are equally as important as its wide-field imaging capabilities. The light from an item is divided into a spectrum, which is a rainbow of colors, by a spectrograph.

Scientists can learn a lot about an object's distance or composition from this range of colors that they wouldn't be able to discover otherwise. Researchers will learn more about the universe using Roman imaging combined with the ability to offer a spectrum of every item inside the field of vision than they could with imaging or spectroscopy alone.

James Webb Space Telescope: Talks About This Telescope Initially Started in the '90s

When the James Webb Space Telescope, named after a former NASA administrator, was initially envisaged over three decades ago, searching for indications of life wasn't part of the job description.

Back then, no one had discovered any planets orbiting distant stars, and scientists' major goal was to build a telescope that could collect light from the universe's initial galaxies.

However, the construction of this $10 billion device proved to be so difficult and time-consuming that a new scientific discipline has sprouted up. This is the study of exoplanets or planets outside our solar system. This telescope's power has piqued the interest of a new generation of astronomers in this discipline.

Laura Kreidberg, an astronomer at the Max Planck Institute for Astronomy in Germany who studies planets beyond our solar system, told NPR that the first talks concerning James Webb Telescope took place in the 1990s.

James Webb's debut will revolutionize our capacity to learn about these far-flung places. Beyond some fundamental facts like how large they are and how far away they are from the star they circle, it's been impossible to know what faraway planets are like.

This is because scientists seldom see the planets themselves. Instead of directly detecting planets, scientists use indirect methods. They may, for example, see how a planet's gravity causes a star to wobble or how a star dims when a planet passes in front of it, blocking part of the star's light.