William Shatner's suborbital trip aboard the Blue Origin's commercial spacecraft, NS-18, recently ended with a success. According to the celebrity, the trip made a huge impression on his views on our planet. Shatner said in an interview that he was overwhelmed when they came back to the surface, as the stunning views pushed him to ponder the quality and value of life's presence on the planet. 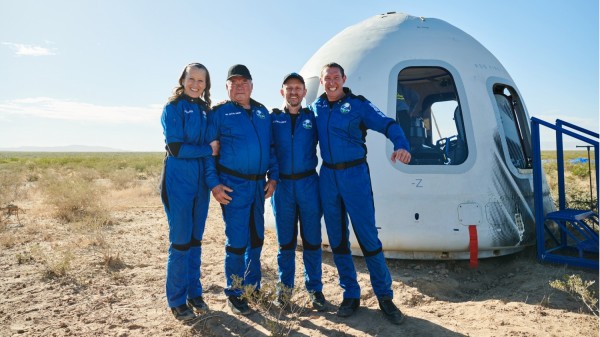 (Photo : Blue Origin)
The passenger crew of Blue Origin's NS-18 space tourist flight poses with their New Shepard capsule after landing back on Earth on Oct. 13, 2021. They are: (from left): Audrey Powers, William Shatner, Chris Boshuizen and Glen de Vries.

Shatner was one of the best actors in the previous decades and had been part of one of the biggest pop cultures in history. He portrayed the main character Captain James T. Kirk in the famous sci-fi program "Star Trek: The Original Series," which was launched on television between the glorious years of 1966 to 1969. Shatner also appeared in most of the movies produced by the same franchise in between the years that the series aired.

Today, Shatner was selected as part of the crew members that had gone aboard the newest Blue Origin project that is led by Jeff Bezos. The suborbital flight was made possible with Blue Origin's NS-18 flight, which was launched on October 13 and landed on the same day.

Shatner said in the October 14 NBC Today interview that he was "overwhelmed" with the stunning perspective they witnessed out of the vast regions of the planet while aboard the Blue Origin spacecraft called New Shepard. The actor was mesmerized by the contrast of life which Earth possesses and the death that awaits from the unending void of space.

Shatner, based on their suborbital observation, believes that people need to maintain the better status of the planet as it is seemingly fragile. The actor believes in a domino effect if we continue to pollute the vast blue surface he saw up the top of the atmospheric level.

Shatner, who is now running in his 90s, said that the physical experience he was able to obtain aboard the 11-minute trip was certainly unique. According to Space, the actor was able to surpass some of the extremities that space missions contain, including floating on a zero-gravity environment, being pressured on a 5G transition, and the hold of the forceful gravity that the planet exhibited as they flew to land back on the surface.

The actor emphasized in the interview that he is already in the older age group, but that did not stop him from being prepared for the Blue Origin suborbital trip. Among the training Shatner was familiarized with is to be cautious during weightlessness. Shatner explained that when in zero gravity, people should get in touch with something, but with a gentle force and just with their fingertips. This guide is to get the feel of the environment's limitations and to prevent individuals from bouncing off the ceiling of the spacecraft.

The microgravity the team experienced was 'indescribable,' according to Shatner. Based on the actor's experience, he did not feel the standard pressure in our guts aboard the trip. Shatner explained that his body seemingly expanded and floated freely in the new, zero-gravity environment he was exposed to within 3 minutes in space.

RELATED ARTICLE: William Shatner Moves to Tears as He Rockets to Space and Back With Blue Origin New Shepard