The 90-year-old Star Trek star, William Shatner, says he's "a bit scared" about Wednesday's rocket voyage. He is the world's oldest person to fly to the edge of space yet.

Shatner's Captain Kirk figure may have dared to go places. During a panel at New York Comic-Con this week (per Fatherly), the actor known for portraying USS Enterprise Captain James Tiberius Kirk admitted he had mixed emotions over this journey. He said he's thrilled, anxious, a little nervous, and a little scared about this whole new adventure.

"But I've got to think that once it's done, once I've been into space and seen the universe and seen our Earth and the contrast between that hostility and this warmth, and how important it is to keep the Earth alive so that we don't wreck it, we human beings don't wreck it, that contrast in all of that is so dramatic to me," Shatner told Sky News.

“We are just at the beginning, but how miraculous the beginning is.” @WilliamShatner is ready to go to space. #NS18 pic.twitter.com/u3MnOAbWtW

The fear that Shatner is experiencing is entirely reasonable, as it's no secret that space flight has significant hazards, including death. The good news is that the trip is only a few hours long, and Blue Origin's flights have been flawless up to this time.

But it's not just dread that Shatner has about his forthcoming space adventure. He's also ecstatic at the idea of life mimicking art when the most famous fictional space explorer ever gets to travel to the stars. 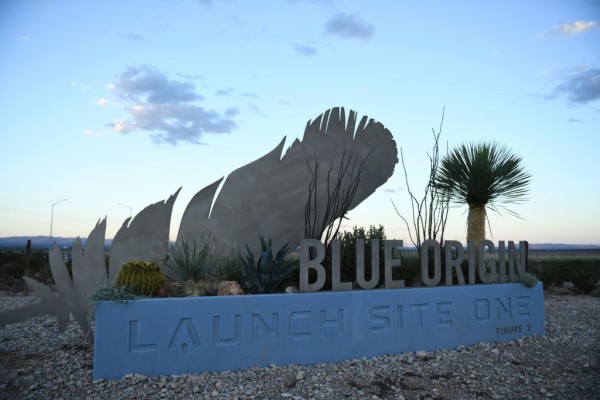 (Photo: PATRICK T. FALLON/AFP via Getty Images)
A sign is displayed at an entrance to Blue Origin's Launch Site One outside of Van Horn, Texas, on October 11, 2021. - Blue Origin is scheduled to launch the New Shepard NS-18 mission to space with passengers, including actor William Shatner on October 13 from West Texas, near Van Horn.

According to the BBC, Shatner will experience a brief spell of weightlessness as he travels to a maximum height of slightly over 100 km (60 miles). Through the capsule's large windows, he'll be able to view the Earth's curvature.

They've had a couple of days of training, but there's nothing really important for them to do on the trip other than relaxing and enjoy it. New Shepard, the rocket and capsule system, is entirely automated.

Professional astronauts have been influenced by "Star Trek," with some appearing on the program over the years. While the 1960s program spawned a series that spans futuristic travel spanning centuries, Space.com said Shatner himself expressed delight at being a part of space tourism legacy, given that Virgin Galactic and Blue Origin only launched crewed flights this year.

Amazon founder Jeff Bezos, according to another Space.com report, established Blue Origin in 2000. Engineers have been testing its suborbital New Shepard rocket since 2015. The billionaire entrepreneur took part in Blue Origin's first crewed voyage to the edge of space in July. The successful mission paved the way for commercial space travel. Blue Origin will broadcast the entire flight live on the internet. You can get all the information you need to watch it online at Science Times.